Since his initial debut in 1954 Godzilla has been the star of numerous monster mash ups. With his North American reboot aiming to crash into theaters in the next couple years I decided to begin watching many of the old Godzilla movies I have on VHS, as well as some recently acquired DVDs. Though I haven’t seen every Godzilla movie in existence, I’ve seen quite a few of them and feel pretty comfortable picking favorites. I do enjoy some of the sillier, more kid friendly versions of the King of Monsters, but tend to prefer the more serious films.  That being said, let’s dive into my picks.

I was ten years old when Godzilla 2000 landed on U.S. shores, and I was ecstatic. I was, and still am, a huge fan of the series, having watched them countless times while growing up. From the first poster I saw in my local movie theater, my enthusiasm couldn’t be quenched.  Back in 2000 I loved the film, but I hadn’t re-watched it in a long time. So I dusted off the old VHS and put in my copy. While it definitely isn’t the best film ever, or even the best Godzilla film, it is incredibly solid. Featuring great fights and good special effects (from a Godzilla movie standpoint) the movie feels familiar but at the same time new. The plot revolves around a recently discovered crashed UFO that takes on a life of its own, attempting to replicate Godzilla’s DNA to improve the DNA of a hostile alien invading force. Luckily Godzilla has something to say about that, and fights a big bad monster spawned partially from Godzilla’s own DNA.  It also features quite possibly the coolest Godzilla finishing move in the franchise’s history. Orga had no idea what was coming. 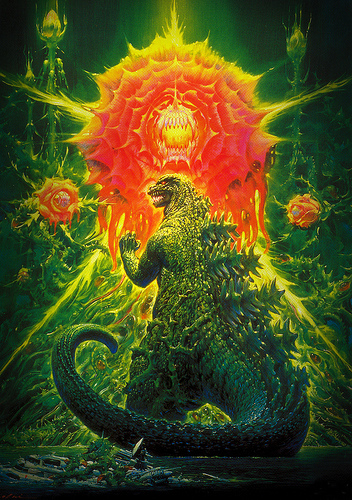 This film, along with its predecessor Godzilla 1985, marked the (in my book) welcome return of Godzilla as a terrible force of nature, rather than a defender of the planet.  Godzilla in this film is a dark, snarling, mass of muscle hell bent on destruction and it translates into a very serious film with a message reminiscent of the 1954 original. When a genetic researcher studying Godzilla’s cells loses his daughter in a terrorist attack he creates a Frankenstein monster of sorts by combining the DNA of his daughter and a rose –along with the DNA of Godzilla. The result is Biollante, a plant like monster that takes up residence in a lake and grows to massive size. As various factions fight for control over the secrets of Godzilla’s DNA the King of Monsters himself emerges from a volcano to do battle with the creature. The film warns of the dangers of messing with things mankind wasn’t meant to understand (genetics) and the consequences, and as a result leaves a lasting impression when other sillier Godzilla films don’t. 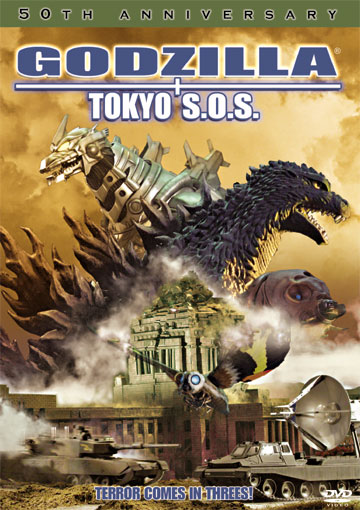 Another one of the most recent films, this one’s quality actually took me by surprise. About a year ago I bought a handful of Godzilla movies on DVD and as I began watching them realized that I had apparently picked up some of Godzilla’s less than stellar entries. Tokyo S.O.S. however, proved to be an exception. Tokyo S.O.S. revolves around the idea that Mechagodzilla was created using the bones of the original Godzilla, and that the reason Godzilla continues to attack Japan is because it seeks peace for his fallen ancestor. Mothra’s twin fairies declare that if Japan will simply return Godzilla’s bones to the ocean that Mothra will take Mechagodzilla’s place as the defender of humanity, otherwise Mothra will declare war on the people of Japan. The result is a three way monster bash that has some of the best fights in the entire series. If you have to (or just want to) watch one of Godzilla’s more recent incarnations, this might be your best bet.

I still have a couple more favorite up my sleeve, so check back soon to see what I pick as my favorite Godzilla movie of all time.