Today Is The Day of The Lightsaber

In honor of this May the 4th, or Star Wars Day, I wanted to give a little attention to one of the greatest weapons in media: the lightsaber.

Now, sure, a laser sword is, at this point, one of the most generic science fiction weapons, and I’m sure there are instances of it predating Star Wars—but the weapon is still just too perfect.

Magical swords have been a part of myth for a long time, but the “magic” of a lightsaber goes so much further than Perseus’ sword that could cut through anything. The lightsaber is an extension of the wielder—it’s color representing the moral alignment of the user.

A Personal Lightsaber For Every Jedi And Sith!

Vader’s saber is enough like a fiery sword that there’s no way that’s not somewhat on purpose.

But, perhaps the greatest aspect of the weapon and the reason that they are so cool to see even outside of the furious and dance-like lightsaber fights is the ability to deflect laser blasts. Sure, blocking a projectile with a sword is already an amazing feat and always cool when it shows up in a show or movie, but the lightsaber often kills by turning back the blast.

Considering Jedi are supposed to be peaceful to some degree—despite the pretty high body count—it’s brilliant. An act of malice destroying the malevolent.

I mean, lightsabers are even used to stop Force lightning, which takes that metaphor to the absolute breaking point, and looks amazing every time it happens.

No More Iconic A Weapon Than The Lightsaber

I posit the reason so many children really got into Star Wars, and stayed with it, was the sheer joyful creative coolness of a lightsaber. Before, kids fought with sticks they called swords.

Now those sticks can be imagined as something even wilder.

Star Wars made swords somehow practical in a film universe with guns. It cannot be understated both how impressive that is, and how far-reaching lightsaber’s impact really traveled. 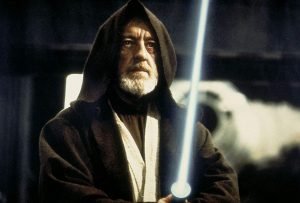