Of all the characters to introduce in Marvel’s shared universe of superheroes, Thor is perhaps the most difficult. Sure, these are comic book movies, so gritty realism isn’t a requirement by any means, but, prior to this, we’ve only dealt in high tech machinery or giant monsters as a result of radically altered DNA. Thor, on the other hand, shows us alternate dimensions and magical realms where godlike beings reside. It’s a tall order for any filmmaker, not to mention the story requirements imposed. See, this movie has to basically accomplish two things: firstly, make what is perhaps the least well-known Avenger known to the broad spectrum of audiences in promotion of The Avengers, and also shoulder the brunt of the worldbuilding for future movies.

To its benefit and detriment, Thor accomplishes what it sets out to do. Not getting bogged down in the specifics of it all, what we’re given is a simple tale of a mighty yet arrogant warrior who redeems himself and comes to care for the people of Earth by proxy of the woman he loves. Despite the massive budget and special effects, there’s something refreshingly quaint about the whole thing.

In the realm of Asgard, where the figures of Norse mythology take physical shape as demigod-like beings, an ancient feud with a race known as the Frost Giants is rekindled. Thor (Chris Hemsworth) plans a foolish mission that results in his father, Odin, (Anthony Hopkins), stripping him of his power and banishing him to the desert of New Mexico. There, he meets Jane Foster (Natalie Portman), an astrophysicist who imparts upon him some humility. As Thor is on Earth, trouble brews in Asgard and Loki (Tom Hiddleston), his brother, puts into place a scheme that could destroy the very fabric of the “nine realms.”

Seeing this again after so long, I was surprised by how straight this whole premise was taken. Maybe it’s my recollections of the sequel impinging itself onto this one, but outside of a few fish-out-of-water gags and Kat Dennings quips, what we have here is a small-scale adventure whose charming earnestness illuminates even the darkest scenes, like the almost indecipherable “Frost World” sequence at the beginning. It’s also a great change of pace to see, at a time where “comic book movie” has become synonymous with urban cataclysm, a finale that only slightly damages a small town in the New Mexico desert. 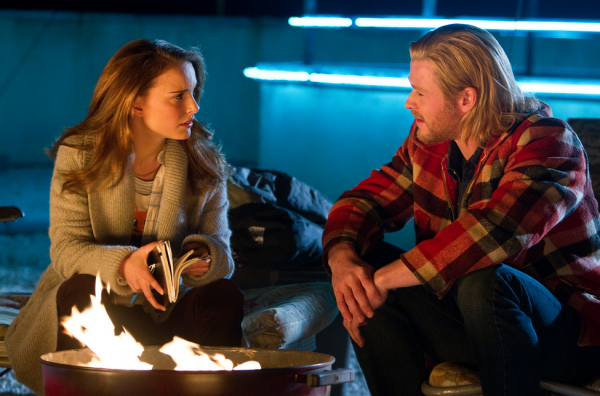 The cast does a fairly good job of lending gravitas to the proceedings. Chris Hemsworth takes a broad-strokes approach, as is befitting the character, but it works and, as the God of Thunder learns to be a better man, you root for him to succeed. Natalie Portman is essentially here to make googly eyes at Thor and spout off pseudo-scientific mumbo jumbo with Stellan Skarsgard, but she does a better job than most would with the role. Her pluckiness is endearing.

After viewing this in the theater, I was particularly impressed with Tom Hiddleston as Loki and felt that he should have been given even more screen time. I’m not going to harp on this movie for that fact, considering it left me wanting more and future films surely deliver. Even the actors who are simply collecting paychecks with small roles strike just the right balance of taking the material seriously yet knowing what kind of movie they are in at the same time.

The most disappointing thing, however, has to do with certain aspects of the production design. Despite some impressive visuals, like the rainbow bridge that welcomes us into Asgard, the worlds themselves don’t feel really lived in. Everything’s too sterile, even when it’s supposed to be messy. Asgard, and the Frost World especially, look like computer backdrops threatening to break the illusion that these far-off places could be real.

Also, while we’re piling on, the score is unexciting. A galaxy-spanning adventure with the sensibilities of a family film from decades past (by which I mean there’s a lack of the snarky humor that epitomized the Iron Man films and other Marvel adventures to come), something more stirring would have been a welcome addition. A John Williams march, perhaps.

Thor does a lot by doing a little. Setting up the existence of alternate dimensions and, by extension, aliens, we won’t have to waste as much time on that in the future. As a film on its own, it’s slight but goofy, straight-faced fun with characters we come to like and won’t mind seeing again.