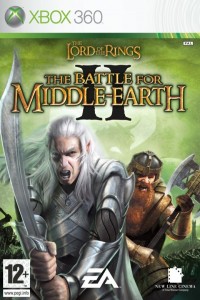 Lord of the Rings: Battle For Middle Earth II was released on PC and Xbox 360 in 2006.  It is an RTS game taken straight from Tolkien’s world.  The player is able to choose between six different factions, the men of the west, the elves, the dwarves, Saruman’s forces, Sauron’s forces, and the goblins.  Each race plays very differently, allowing for plenty of fun and replayability.

Gameplay for this game is good.  Battle has all kinds of factors built into it like flanking and surround penalties, allowing for serious micromanagement to have big payoffs.  Resources are infinite and are gained by placing resource buildings on open ground.  Each building is given a percentage based on how open the terrain is.  Cluttered terrain (For instance other buildings or mountains) will lead to a lower percentage.  The higher the percentage, the more resources the building will provide.

Another interesting idea is the addition of powers.  As you kill enemy units you receive power points, which you can use to buy increasingly powerful powers.  For instance, one of the early powers for Sauron is the eye of Sauron, which increases experience gains of your units in its area, buff them, and reveals the fog.  It costs 5 points.  One of his highest level powers is the ability to summon the massive Balrog, which the player can control directly to annihilate most anything.  It costs 20 points.

I would recommend this game to any Lord of the Rings fan.  It’s not very expensive now and it can be a lot of fun running Sauron’s forces down with a horde of Rohirrim and king Theoden at the front, or blowing the walls of helms deep by lighting a mine with a berseker.  The campaign is fun as well and I’ve gotten plenty of hours out of it for what I paid, despite the lack of multiplayer.  As for being on the Xbox 360, I’d say that it’s one of the few RTS games that has been able to make a successful transition to a console.