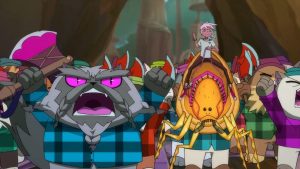 Kipo and the Age of Wonderbeasts is a fascinating piece of children’s media for one major reason above all: it’s post-apocalyptic. The world is broken, battered, and it seems like most humans are dead or in hiding. That’s a very dark place to take a children’s series that I have not seen explicitly done since Adventure Time, and that’s only as a spoiler.

But the appeal of it is obvious, having seen the first three episodes that I usually watch for these reviews. Though the default look of the world is a lot of busted buildings overrun by plant life, there are moments where it’s fascinatingly weird and allowed to have been molded by the inhabitants of the world to gorgeous or intriguing effect. The cat lumberjacks’ yarn and scratching tree city, though kind of silly conceptually, feels weirdly lived-in, with a culture and a history. The main villains of the first few episodes (giant frogs in suits) are oddly threatening and eccentric without being overly scary—and they too feel like a strange and organic part of the world. 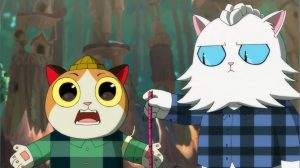 Kipo Can Come Across A Little Silly In Its World

I am impressed by the perceived danger of it all. It helps that, at least from the way they talk, a lot of “mutes” (mutants) are fully capable and willing to eat or kill humans. It leads to the dynamic of the main characters always being dominated power-wise in any situation they end up in during an adventure.

And this does lead to something that, I have a feeling, is part of the point of the show. The tonal dissonance of it is just enough bothering me that I have to mention it. It’s Kipo herself. She’s a wonderfully likable character, who has a fantastic voice actress to play her; but she causes a lot of the dangerous situations in the first place.

Like, yes, it’s a kid’s show, and sometimes she’s entirely right to go back and save someone, but the lethality of this doomed world is somewhat diminished by how often she pisses off mutes or otherwise gets herself in situations where she is in immense danger and makes it out of the situation without much consequence. 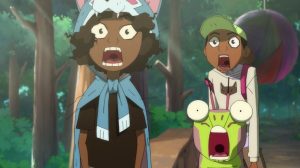 But, again, that is probably the point, and the rest of the show manages to hide that fact beneath a lot of charming characters and lines of dialogue. It moves well, too, with stellar and fluid animation when the show wants to raise the energy of a scene. Often Kipo’s characters feel a little stilted in movement or like puppets being dragged around a 2D backdrop (because that’s what they are on a technical scale) but I have to imagine that’s saving the budget for the wild, frantic and frenetic action scenes that pop up in the series and are a delight for the eyes.

I can recommend Kipo on the strength of a few things that overcome every flaw. I can praise the creativity, the world, the gorgeous soundtrack, the unique tone, and ultimately label it as worth your time.

You have not seen, or indeed: heard, a show quite like this one, and I think, even in a time of a lot of great shows, we have even more to explore and should support something off the beaten path. Give Kipo and the Age of Wonderbeasts a chance. It might just be something you’ve been wanting for a long time.