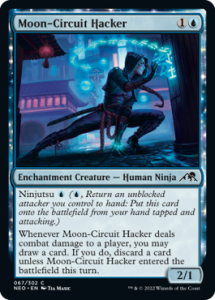 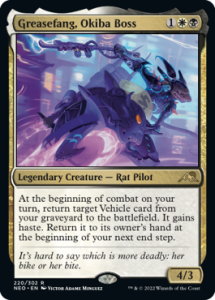 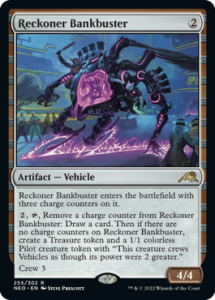 Aggro decks with fast starts used to be all the rage. Azorius versus RDW is an age-old matchup. But, so far, most meta-aggro decks focus on growing creatures and overwhelming—but slower—board presences. But even with that evolution, we’re not seeing aggro decks in the numbers or power level range I expected. It seems there should’ve been a burst of Ninja Aggro builds, perhaps using Moon-Circuit Hacker for card advantage or Thousand-Faced Shadow for some damage trick. Or maybe some new RDW Affinity list with Reconfigure creatures paired with synergy cards like Towashi Songshaper and Patchwork Automaton. But anything creative like that rarely happened during research games (I saw Ninjas maybe once). Occasionally, I’d see a zombie or vampire build or some low-to-the-ground thing using Reckoner Bankbuster, but it’s all underwhelming. I suppose Greasefang, Okiba Boss could form the backbone of a vehicle aggro list, but the pool doesn’t seem strong enough outside Historic. Neon Dynasty did give us awesome new mechanics and interactions, but the one seeing use isn’t helping aggro much…

Impression #5: Channel is Such a Strong Ability 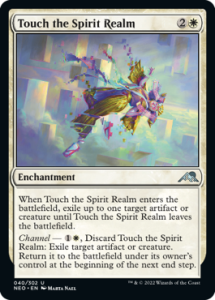 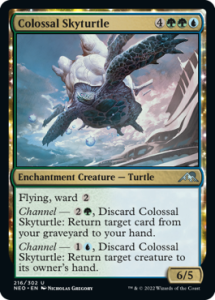 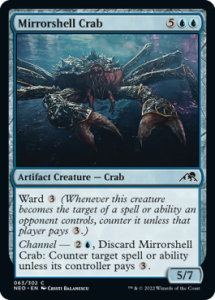 Whoever decided that Channel was going into this set was a genius. I may be over-hyping, but an “uncounterable” ability stapled to a creature that makes them way more flexible as a deck choice was supremely clever. The obvious best is Mirrorshell Crab. Ability countering shouldn’t be undervalued, and the “mana tax” is high enough to usually short out the opponent. But don’t discount the other Channel options. Colossal Skyturtle is such a flexible card it boggles the mind. Even just a nearly uncounterable bounce is useful in a lot of contexts. Cards that are not green or blue got somewhat screwed, but Ironhoof Boar and Touch the Spirit Realm are both interesting combat tricks that can and—in the latter’s case—do see some use. But you may have noticed I skipped a type of Channel card that’s especially exciting… 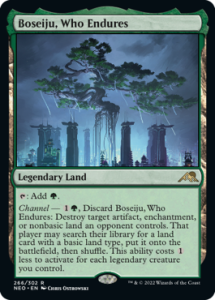 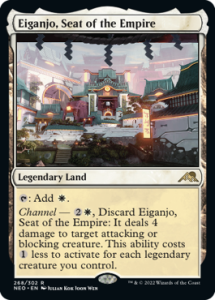 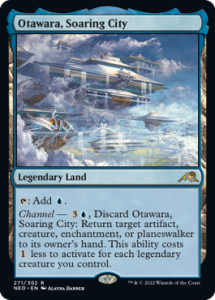 I keep harping on how much I love when WOTC makes lands a more prominent part of the deck. Magic is more fun when every card you draw feels like it can do something impressive. And while the Neon Dynasty Channel lands are no Zendikar Rising modal lands, they have their place. Their legendary status limits them slightly but putting abilities like these on lands is simply delightful. The best ones are green and blue—but what else is new? Otawara, Soaring City is a very flexible bounce that will ruin someone’s day. It’s practically an auto-include in a land-glutted control build. Boseiju, Who Endures is in a class of its own, however. Balancing artifact and enchantment removal in a deck has always been an important consideration and providing it with a land fulfills the need without losing a spell slot. It working as another way to kill Hall of the Storm Giants is not immaterial either. There’s usually no penalty for using a few copies of legendary lands, so consider it when building.

And that’s my initial impressions of Neon Dynasty. Of the recent sets, this has been the most refreshing. The meta needed this shakeup. A solid way to spawn new decks and make things a little less aggro all the time. The set also having some of the best artwork I’ve seen from Magic doesn’t hurt either. Whether you like that Magic is being futuristic, it’s hard to argue against the cyberpunk esthetic. It’s hard not to be excited to sling spells like these. 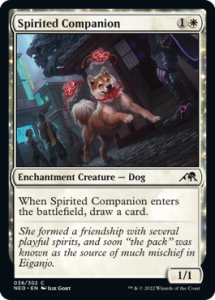 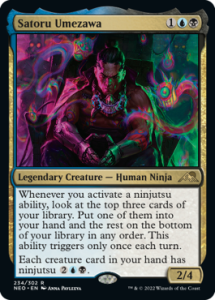 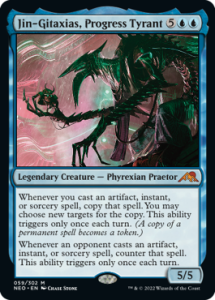