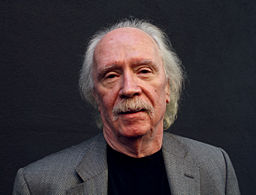 From the ambiguously motivated masked serial murderer of Halloween to the bourgeois alien-humanoid oppressors of They Live, filmmaker John Carpenter has carved quite a niche for himself. Although long appreciated as a “master of horror,” Carpenter has demonstrated his creative prowess across a number of genres. He shot his first theatrical feature during his student days at USC—a darkly comedic science fiction film entitled Dark Star (1974). Now a cult favorite among sci-fi fans, the film is also notable as the predecessor to Alien, whose writer, Dan O’Bannon, had worked with Carpenter on it.

Now forty years into his career, he was recently touted by Entertainment Weekly as one of the most influential directors of 2014, despite the fact that he’s only directed two feature films this century. It’s not just the many recent remakes of his earlier films that lead to this critical judgment, but the number of Carpenter echoes found in younger filmmakers’ work.

In Carpenter’s early career, he was lauded for his ability to make thrilling films on a small budget. But when you look back at his achievements, part of what stands out is the remarkable amount of creative talent he poured into every aspect of filmmaking. For example, on his 1976 low-budget thriller film, Assault on Precinct 13, he wrote, edited, directed and scored the project. The film’s intense synthesizer music is still influential. His minimal, mood-setting music continues to leave impressions of itself on current directors like Jim Mickle, who often uses Carpenter music when temporarily scoring his own thrillers.

Carpenter’s 1978 horror film, Halloween, a suspenseful “slasher” movie about a babysitter stalker, has become iconic in the genre. It was also his first commercial hit, with a low budget that compelled him to stay creative from costumes to casting. It stars the then almost unknown Jamie Lee Curtis and veteran British actor Donald Pleasence, both of whom turned out to be great casting choices. But Halloween wouldn’t have been the success it was without Carpenter’s deft ability to set a spooky atmosphere through creative shot composition.

The 1980s ushered in some initial disappointments. Curtis returned in 1980’s The Fog, a ghost tale about a town haunted by vengeful leper pirates. The Fog did well commercially though not critically. Carpenter did strike big the following year with Escape from New York (1981), which featured Kurt Russell as Snake Plissken, a one-eyed bandit in a dystopian New York set in “the future.” The film is sort of like a science-fiction/western crossover. 1982’s The Thing showcased Kurt Russell in a science-fiction/horror story about an extraterrestrial that terrorizes a research station in the frozen wastelands of Antarctica. The Thing did not do well at the box office, mostly due to the fact that it was up against Spielberg’s friendlier extra-terrestrial, E.T., and Ridley Scott’s blockbuster, Blade Runner. A common criticism found in reviews, including Roger Ebert’s, was that too much emphasis was placed on special effects, while not enough attention was paid to character development. Nonetheless, the film was lauded for its excellent special effects and has been reappraised by many as one of the most successful films of its kind, ranking 97th in Rotten Tomatoes’ “100 Best-Reviewed Sci-Fi Movies.”

Carpenter has tried his hand at other hybrid type films, including 1984’s Starman, a science-fiction/romance that garnered Jeff Bridges an Oscar nomination. The film tells the story of an alien lifeform who, after accepting a recorded invitation that was transmitted by the Voyager 2, decides to come to Earth, just to scope it out. He crash lands his ship outside the home of a distraught widow, Jenny (Karen Allen), who is, around the time of the crash landing, watching home movies that she shot with her widower, Scott (Jeff Bridges). The alien flies into the widow’s home and finds a scrapbook containing a swatch of the widower’s hair. The alien uses the DNA from the hair to generate a clone of Scott. It’s then up to Jenny to help the alien find his way to the Winslow crater, where he will rendezvous with his mothership. One of the most compelling aspects of the film (and it’s entirely possible that Carpenter decided to take cues from Ebert) is that Carpenter is acutely attentive to the onscreen chemistry between Allen and Bridges. The special effects and sci-fi elements are just textures—they aren’t the tail wagging the dog. One of Carpenter’s more mainstream films, it enjoys enduring popularity. It’s still shown regularly on television and it’s also a popular streaming option through Netflix and other websites (click here for more info).

Carpenter’s more recent work has included segments for Showtime’s Masters of Horror television series, welcomed by critics, and the less warmly-received The Ward, the 2010 movie that marked his return to feature film. Most thought the frightening psychological thriller was not up to his earlier standards, but as the critics should have learned long ago, with Carpenter, only time will tell.

This article marks the debut of new contributor, Brandon Engel! Give him a warm welcome!