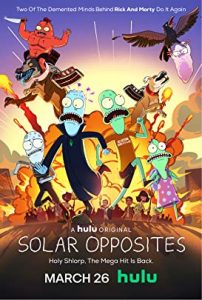 More of The Same Solar Opposites

The next season of Solar Opposites is here. Just like I did with Rick and Morty, I figured I would cover it, and add thoughts I’ve had about the show since the first time around.

And, wow, do I have a lot of thoughts.

So, first off, the obvious question: how do the seasons compare? Well, in that regard, the show has changed little. The comedy is offensive, and the animators have absolutely no issue with showing a lot of gore and death and destruction. Humans get melted and pulped and all manner of other nasty ways to go. That aspect has not been increased, nor has it been diminished.

What has become much more apparent, though, is how hard the show leans into its sitcom roots. The basic premise for an episode is often a Boy Meets World/Friends/Seinfeld style plot that almost immediately goes way off the rails. A simple “I like this family more than my own” plotline happens but results in a sci-fi battle. Or a plot about feeling like an outcast at a dinner party that ends in one of the most horrific monster attack scenes in animation. 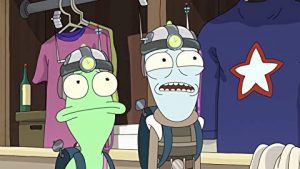 This Show Still Manages To Be Really Disturbing

But what’s especially interesting is the stories conclude (sort of) how you’d expect. The characters learn generic life lessons and have heart-to-heart talks like this is How I Met Your Mother. It can even be weirdly sentimental.

The other aspect of the show I noticed more often was the meta-humor. You’ll see what I mean in the first episode of the season, but the characters—at least some—are somewhat aware they’re in a show. This does not detract from the heart or peril of any scene. The characters are not immortal or able to just save themselves like Deadpool might. Thankfully, it’s sparse enough to keep the show grounded and engaging.

So, the question again: should you come back for the second season? Well, like I said at the onset, if you like the first season, then you’ll like the second. Now that the show has established rules, characters, and locations, they can get to the absurdity faster. The taboos can be wrecked with even less need for priming. If nothing else, Solar Opposites is a show comfortable in its insanity and will amuse those who are on the same wavelength. 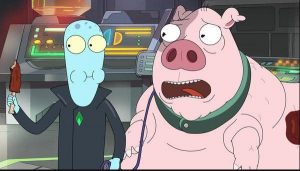