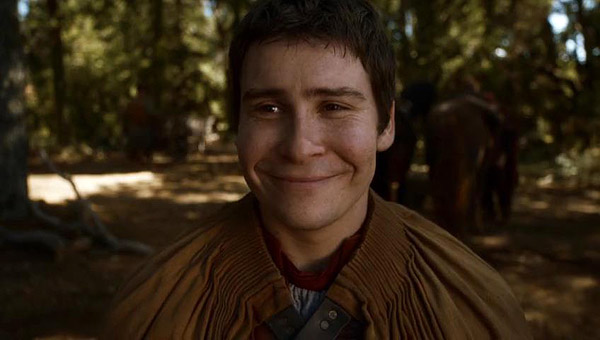 If you haven’t seen the fourth episode of this season of Game of Thrones, “Oathkeeper,” read at your own risk.

There are many parts of the episode that stay true to the books, so let’s not completely freak out. Brienne and Podrick are a match made in Awkward Heaven. I saw a plea from a fan that Grey Worm and Missandei should “totally hook up.” I’m not sure if they quite grasp the concept of eunuch. I’m okay with Bronn giving Jaime sword lessons, especially after hearing the news that Wilko Johnson, the actor who portrayed Ser Ilyn Payne, is terminally ill (the executioner who killed Ned Stark and doesn’t have a tongue, therefore unable to tell anyone how bad of a fighter Jaime actually is without his sword hand). I’m also thrilled that Tommen’s cat, Ser Pounce, makes a cameo!

First off, “Locke” is in Castle Black scouting out our good friend, Johnny Snow. Originally, he was supposed to be Vargo Hoat, a man with a slobbering lisp who should not even be alive anymore, but Locke has taken on a completely different role since Jaime rescued Brienne at the bear pit. So he’s playing the “got caught stealing for my starving family” sympathy card to Jon and apparently Sam’s like, “Hey, guess what? Bran’s totally fine.”

Sam is not supposed to tell Jon about Bran! They make him swear that he won’t tell anyone because the whole world (apart from Theon) is supposed to believe him dead! It’s safer that way for his journey beyond the wall that no one knows that there still lives an heir to Winterfell (besides Sansa, which is easy ‘cause you can just marry her off and–oh, wait, she’s gone now. Oops. King’s Landing sure does have a hard time keeping track of Stark girls).

Okay, whatever. So now Jon’s all like, “Hey, bros, let’s get together and storm Craster’s,” because for some reason he thinks Bran will end up there? So then we go back to Craster’s, where the way that they’re treating Craster’s daughters/wives is far more disturbing to me than the Jaime/Cersie scene that has everyone raving (incidentally, I was irritated with the major setback in Jaime’s character development).

And behold! Craster’s last son is born. (The women are very enthusiastic to give him to the White Walkers when just last season they were helping Gilly run away with her baby boy.) And who should be nearby? Hey, Bran, we were just talking about you.

WHAT is Ghost doing in a cage at Craster’s? In the books, ahem, Ghost was dismissed by Jon not long after he joined the Wildlings. He was basically like, “Hey, go back to the Wall and wait for me there.” Except Ghost wasn’t there when he got back, but he eventually turned up one day and we still don’t know where he was off to. So Benioff and Weiss, you know something we don’t know? (This could probably be true since George gave them a rundown of where the books were going.) 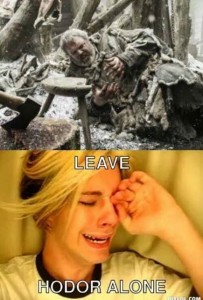 Okay, okay. I’ll let this go. BUT WHY did you have to get Hodor involved in this mess? Hodor, who is ever the gentle giant, is tied up outside by the Night’s Watch rebels, being poked at by spears.

And then Bran, Jojen, and Meera are all dragged into the tent where Jojen starts foaming at the mouth, and he really isn’t looking so well. There are rumors that a character will be killed off this season that is still alive in the books. Could this possibly be Jojen? I DON’T KNOW.

What’s Jon doing? He’s supposed to be getting ready for the Wildlings to attack the Wall (with these weird cannibalistic Thenns who look straight up from Prometheus), but instead he’s off saving his brother who’s supposed to be presumed dead. Who’s going to hold down the Wall? Will Bran ever reach the three-eyed raven?

And finally, the book readers’ serious WTF moment: Craster’s babies are being turned into White Walkers! BAM. Spoiler alert! That hasn’t been confirmed in the books, so book readers and show watchers alike have finally experienced something for the first time at the SAME time. That hit me right in the smart ass “well I read the book” feels. 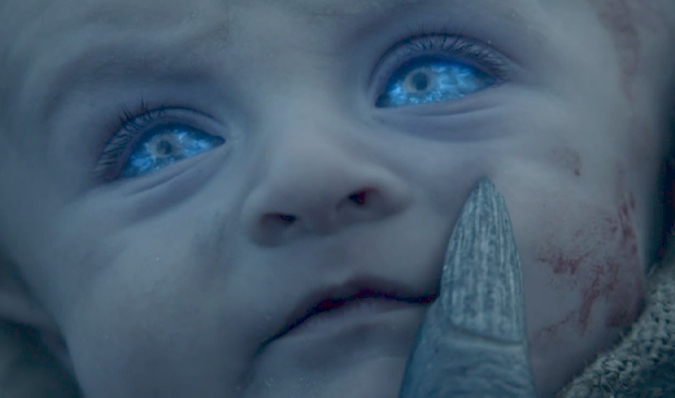