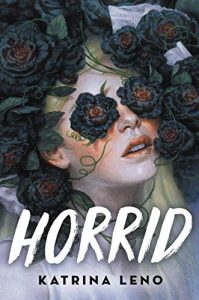 Horrid Has Quite The Specific Theme

Horrid is a book about emotions more than anything else. Its plot, its ending, its momentum are all in service of getting across big emotional moments. Specifically, rage and grief.

But Horrid doesn’t just display these emotions, it wants to explore them. Examine them not by pontification alone but by showing their effects on characters hit and consumed by them. It wants to talk about how abuse and loss—especially the loss of a family member—can cause these two emotions to come out in different ways. A lot of prose in Horrid is dedicated to the internal feelings of rage so hot and grief so deep it undoes people. The standout and impactful ending especially combine these ideas with the actual nuts-and-bolts plot.

But, because to talk about that ending would be a spoiler, I’ll go into the details preceding it. The characters who bring it to that point.

And in that regard, this is a two women show. Sure, other characters make their appearances, but if I’m highlighting one other aspect of this book where it excels, it would be in the core relationship. As far as I, a male writer, can tell, the interplay of this mother and daughter duo is naturalistic and intricate. They are two people trying their best to survive something emotionally impossible. How they help and support each other is just as interesting as how they fail each other. Ruth, our mother character, complicates as the story goes, and comes into a new light—a light that’s upsetting and raw. For every adult that eventually grew to know their parents as complicated, flawed people, Ruth’s story will hit hard. It’s framed through the dramatic lens of a horror novel, but it rings emotionally honest.

And then we have our main character, Jane. We spend quite a long time in her head—despite this being a third-person novel. With her, we experience the anger, the grief, and the thoughts that come unbidden during deep loss. Grief is different for everyone, but anyone who’s experienced it will find something in this character.

Sadly, here’s where my praise has cracks and exceptions. And it starts with not Jane herself, but some trappings around her. The plot follows a very typical, very standard “new girl in a new town” plot for a good chunk. Had the horror elements been removed, and the ending changed, this has all the flavors of a contemporary romance novel. The main character is obsessed with books, has a too-perfect love interest, and—crucially—moved into a small quaint town where she knows no one. I’ve seen that Hallmark movie.

But Horrid, even in those moments, is better written than a typical Hallmark venture. I enjoy contemporary romance novels and the character work here is fun enough in that framework. So, for those of that inclination, it’s enjoyable, but it was odd to have as much space devoted to it as Horrid does. I can see how the intent might be that dissidence. Horror and normalcy crashing at each other. But at the moment-to-moment flow, it’s mostly a distraction from the horror.

And let’s get to that horror. Let’s talk about the outright spooky parts. The ultimate question of any horror media is if it’s scary or disturbing or not. And, thankfully, yes, Horrid is frightening. For a regular horror reader, it’ll not be a revelation, but the moments of tension and their payoffs occasionally are unnerving and impactful. The previously mentioned ending is quite disquieting.

The biggest help on this wavelength is Jane’s unreliability as the plot moves. Her perceptions—and thus ours—become warped and changed as the story progresses. And for a book containing hallucinations, the ability of author Katrina Leno to keep us grounded and the tension high is impressive. That’s rarely easy in surreal scenes.

For those that are excited at the prospect of a horror book with such an emotionally raw core, Horrid is not horrid—it’s fantastic. It’s a twisty, fast-paced novel that’s different enough to feel fresh. It’s constructed on a solid core, even if some of its ingredients come from another genre. If you need something to read this Halloween, consider picking up Horrid.