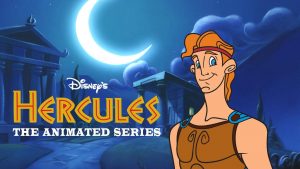 Hercules Should Never Have Been Forgotten

Did you remember that Hercules (the animated series) exists? Because I didn’t and it’s frankly a shame. At least from the first episode, Hercules is kind of amazing—if you like Greek mythology, that is.

Because this show seems to be some lucky writers having the time of their lives. From the first ten minutes, there are more puns, in-jokes, and references than I could feasibly keep track of and still watch the story. From the storefronts to the verbal expressions, there’s no end to the wit on display here.

But it’s not all puns and wordplay. This is a comedy show that manages to have jokes for all ages—some even rather dark—and has a mindset geared toward sheer fun and absurdity. 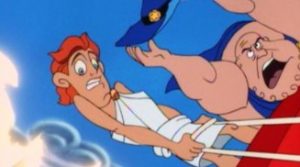 And the dynamic just works. Even when applied to the characters, this tone is successful. I was not sure I’d be cool with Hercules having “normal” friends to hang out with, but Cassandra is a wonderful addition. She’s both very sarcastic, and yet likable. Icarus, on the other hand, seems like he’s going to become annoying, but he’s fairly tolerable so far. 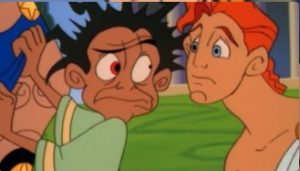 Hercules Adds A Lot, But Mostly For The Better

The real genius though is having access to the gods. Hades was such a fun character in the movie, and that holds here. He’s got the same energy as always—and his schemes are somewhat better thought out than most villains of episodic shows.

And then we have Zeus. He’s nothing like mythological Zeus, but he’s perfect as an overly excited dad. The scene of him being mad that Hercules worked a gyro stand—and not something more fitting of a demigod—is adorable and fantastic writing. 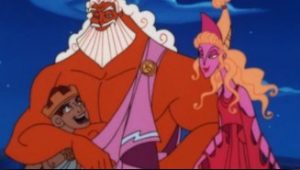 Hercules Bucks Myths If It Improves This Story

So, then, is this show just excellent? Is it an underappreciated masterpiece? Possibly, yeah. While I can’t speak for how well the series progresses, I can say almost everything in the first outing is amazing.

The animation is sometimes really bad.

The character’s facial animation can become flat or suddenly really undetailed. The movement between scenes suffers as well, with what feels like hard jumps and cut scenes. Sometimes stuff suddenly looks clean and smooth and like it’s right out of the movie, but then it takes some seriously hard turns. I know some people don’t care about animation quality as much as the story, but it is worth mentioning—if only to make it less jarring.

But for those that don’t care about that and just want more of Disney’s sanitized but endearing version of Greek mythology, this is a perfect choice. It’s funny, clever, and has an excellent theme song. If you need comfort television, Hercules is on Disney+, and worth a watch.