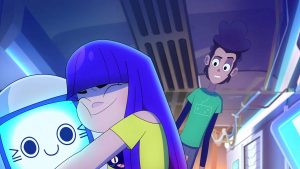 Glitch Techs proves to me that the new trajectory of animated shows is high energy motion and manic dialogue. It was jarring enough in DC Super Hero Girls, but this show takes it up to eleven. During the review-watching of Glitch Techs, I had to constantly rewind to hear lines of dialogue or to see what was happening in the background.

But you know what this show does amazingly well? It understands video games, video game culture, and the aesthetics of video games. The animation feels choppy at first, but the pixel style is like 8-Bit but in a way that’s fluid, and the action scenes prove that the show has a real understanding of using that style.

And they also know a little of how gamers talk. At first, I rolled my eyes at the frequent gamer slang—until I realized it was all accurate. The characters always use it in a way that’s fitting.

All of this leads me to believe that this show was made by people who care about video games. Who grew up with the medium—and are not just trying to capitalize on something perceived as popular with the kids. 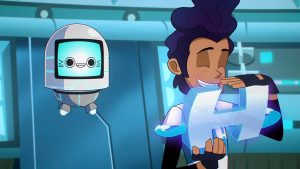 That’s wonderful by itself. If nothing else, I think it’s positive for there to be a show that respects gamers. The main characters are shown to be capable, relatively responsible, admirable people, who enjoy games, who take great pride in their skill at games, and are not bad or lazy. Never once is it treated as a pure waste of time—and that’s infinitely refreshing.

But, otherwise, this is just Men in Black for kids. They even use the same style of “look here and be mind-wiped” technology. But, honestly, I don’t even mind. They put a spin on it that’s genuinely interesting—as the company that deals with the glitch monsters is also the sole cause of the problem. And though the logic of that doesn’t hold up well, it’s an excuse for a lot of fun ideas and concepts.

If nothing else, Glitch Techs is fun. It’s a sugar rush of gaming. It’s not unlike a high-intensity Call of Duty or Halo session, where you’re hopping from enemy to enemy. I can’t recommend binging Glitch Techs—I needed breaks between episodes—but in short bursts, it’s an exhilarating ride. 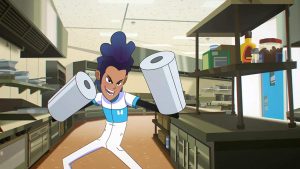