Wild Arms 2 is the sequel to the massively popular Wild Arms. The original alone was an impressive feat, considering it stood in the shadow of RPG giants like Final Fantasy and Dragon Warrior. The game’s developers, recognizing the elements that made Wild Arms an underground hit, kept many details unaltered. The Wild West atmosphere, the post-apocalyptic world, the blocky battle avatars, and the Tools subsystem (objects necessary to complete puzzles) and character-specific battle abilities all remained intact. Keeping to this formula allowed the sequel to bask in its predecessor’s success. But where one finds pros, cons are sure to follow. This article will attempt to explore both sides of the equation.

First, the positive. Wild Arms’ three-member roster has been expanded to five, with an optional character. As a nod to Japanese superhero shows, protagonist Ashley Winchester can “morph” into an armored knight named KnightBlazer. This form requires a full Force Command meter (a gauge broken into four quarters, filled when characters take damage) to execute. The majority of Ashley’s actions against bosses entail waiting until he gets hit. This renders Ashely’s ARMs arsenal moot. 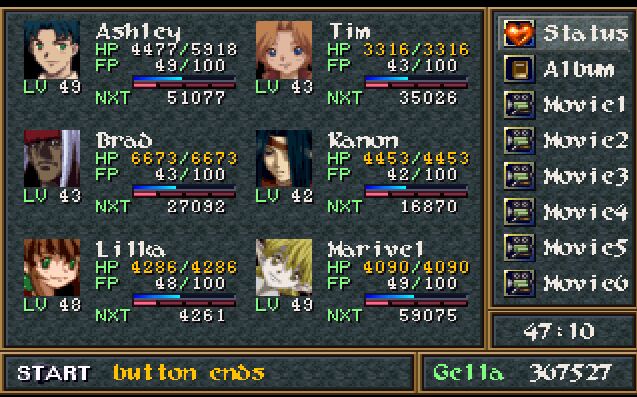 Brad Evans is the stoic soldier of the group. While slower, his ARMs can take on multiple enemies. His high vitality allows him to absorb more damage than other party members as well.

Lilka Eleniak is a copy of the first Wild Arms‘ Crest Sorceress, Cecilia Adlehyde. She has an inferiority complex thanks to her near-legendary sister, and her schoolgirl crush on Ashley doesn’t really go anywhere. Still, her ability to change single-target items to multi-target items makes her a useful healer early on…until Tim Rhymeless shows up.

Tim’s special ability is to copy enemy attacks. This gives him vast magical potential, but the thing which guarantees him a permanent spot in the active battle party is his multi-target healing. Other than that, Tim cannot do anything that Lilka can’t.

Kanon is a cyborg assassin. Every time she uses a unique technique, there is a random chance that she will learn a new one. This chance is very low, so fleshing out her battle abilities may take more time than the player is willing to invest.

Marviel Armitage is a vampire-like Crimson Noble. Her special Tools are necessary to finish optional dungeons, but her late arrival makes her seriously under-leveled, requiring the player to spend time beefing her up so she can hold her own alongside other characters.

Unfortunately, the one glaring flaw, the thing that made me throw down the controller in frustration, is the game’s habit to freeze mid-battle. I’ve lost track of the times I scrubbed the CD clean and hoped the glitch was temporary. It never changed. I even bought multiple copies of the game, and this problem was present in every one of them. I recommend going online to purchase and play the game from the PlayStation Store.

Is the game worth all the trouble? Not unless you’re a die-hard Wild Arms fan. Otherwise, I’d steer clear of this.

If you enjoyed Michael’s arms (kek), you can find the rest of his work right HERE on Sci-Fi Bloggers. You may also check out his personal blog over HERE.