In weirdly exciting and terrifying news, the game series Five Nights at Freddy’s is headed to movie theaters. The Hollywood Reporter announced the news that Warner Brothers has snatched up the rights for a film. I know that people might be thinking, “Lame,” or, “It’s going to be stupid.” However, let me tell you why you should be at least a little excited. 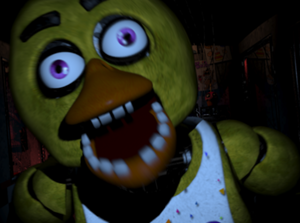 Nothing scary about a chicken.

The game, created by Scott Cawthon, has been a hit since releasing in August of 2014. In fact, as of March, it already has two sequels. People like to be scared, and the easy point-and-click horror game offers jump scares, creepy sounds and childhood phobias that would freak anyone out. If you want a look at the game, then I suggest typing it into YouTube and looking at one of the hundreds of videos gamers have made of themselves or of others reacting to Five Nights.

It’s also a fun yet wicked concept. In the game, you play a new employee and your only job is to keep an eye on Freddy Fazbear’s Pizza joint during the night shift. Weird thing is that the animatronic robots like to wander at night, and if they find you then they think you’re just like them, but out of costume. That’s when they will violently shove you into a mechanical costume and kill you. There are pieces of mystery hinted throughout the games about missing children and an alleged child murderer and in Five Nights at Freddy’s 3 you get to unleash the truth.

Is it a little silly? Yes. Could it be a fun film? Absolutely. Will they choose to focus on the standpoint of the player or the animatronics, or will they turn to the creepy history of Freddy’s? Set to produce the film are Roy Lee, David Katzenberg and Seth Grahame-Smith. Lee specializes in horror and Katzenberg and Grahame-Smith are currently collaborating on a number of projects. This is a team you should be excited about. Grahame-Smith is the guy behind Pride and Prejudice and Zombies and Abraham Lincoln: Vampire Hunter and he and Katzenberg created the MTV series The Hard Times of RJ Berger. So, it already looks as though the film could be a mix of horror and comedy. Which is exactly what it needs to be in order to be great. I’m hoping for a Cabin in the Woods-esque tale.

What do you think?

If you enjoyed the Carly’s HOLY-SNORFBOBBLES-AN-HONEST-TRAILER, you can find the rest of her work right HERE on Sci-Fi Bloggers. You can also follow her on Twitter @MrsCarlyRodgers.