Alicia (played by Alicia Debnam-Carey) and Charlie (played by Alexa Nisenson) find John (played by Garrett Dillahunt) and Strand (played by Colman Domingo) but can’t reach them because of flooding and alligators. Alicia contacts Morgan (played by Lennie James) on the radio but he doesn’t reveal their location in case Martha (played by Tonya Pinkins) is listening as well.

Jim (played by Aaron Stanford) contemplates jumping off the hospital roof as he dies from his bite and refuses when Morgan asks for help saving the others, blaming Morgan for his bite. As they leave Sarah (played by Mo Collins) tries to get his beer recipe but he only offers a stream of insults. Alicia and Charlie look for a way to save John and Strand when they’re attacked by an injured Martha. Alicia’s attempts to offer help only enrage Martha further before she collapses from her wound.

Morgan and June (played by Jenna Elfman) lead the others downstairs to search for Althea (played by Maggie Grace). They check the generator and find a note from Althea saying she made a break for a freight elevator after her radio died and lost contact with them. Meanwhile Alicia and Charlie use Althea’s truck to drive through the flood and pick up John and Strand with a tied up and unconscious Martha. 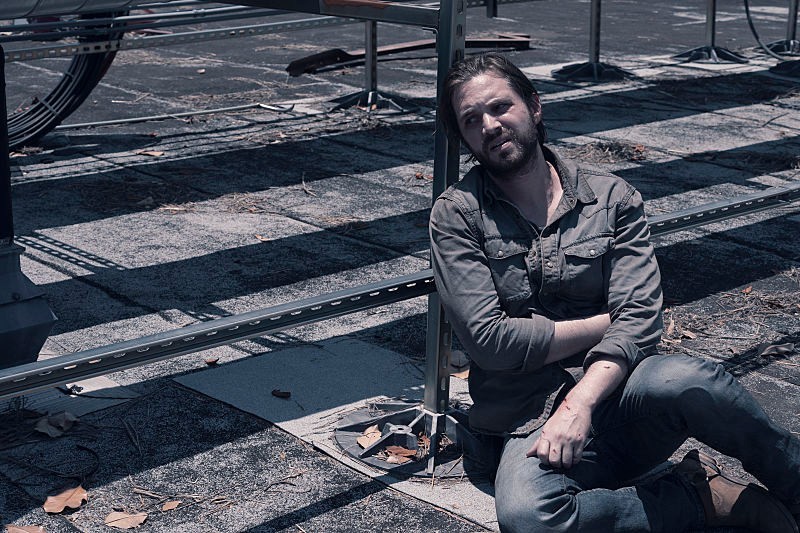 Jim is pissed that he’s going to die and he’s letting everyone know it which may be a dick move but the man is dying. But part of what keeps the story on edge is wondering what Jim might do knowing he won’t make it and blaming Morgan. Alicia and Charlie found John and Strand but it seemed too easy and coincidental especially because we’ve seen people find each other with relative ease already. Even when Martha started shooting them they just had to wait her out until she collapsed from her gunshot wound, but saving Martha is an obvious mistake that will bite tem later. Despite everyone reuniting this is the penultimate episode which means sooner or later the other shoe will drop. Martha’s arc feels nearly finished so the only story threads are she probably takes someone out with her or a new threat will be introduced in the finale.

Morgan still feels guilty for getting everyone trapped and decides to distract the walkers outside the hospital so the others can escape. John contacts June to tell them they’re safe from Martha and she tells them where to find the hospital. Martha wakes up furious to find herself under Alicia’s care; Alicia only saved her because she knew Morgan wanted to but Martha cryptically says Morgan will soon thank her. While a despondent Jim watches Morgan drops a walker body on a car to activate the alarm allowing the others to escape to an ambulance.

Morgan refuses June’s pleas to come with them saying he has things to ‘make up for’ and she has to drive off with the others when the walkers close in again. They meet up with Alicia and the others, and everyone returns to the hospital with a fire truck to get him down but Jim refuses to go as he’s already dying. They rescue Morgan but before they can drive away walkers trap the fire truck. Morgan decides to create another distraction but Jim radios to stop him, after giving Sarah his beer recipe Jim jumps off the roof onto another car to activate the alarm and draw the walkers away. 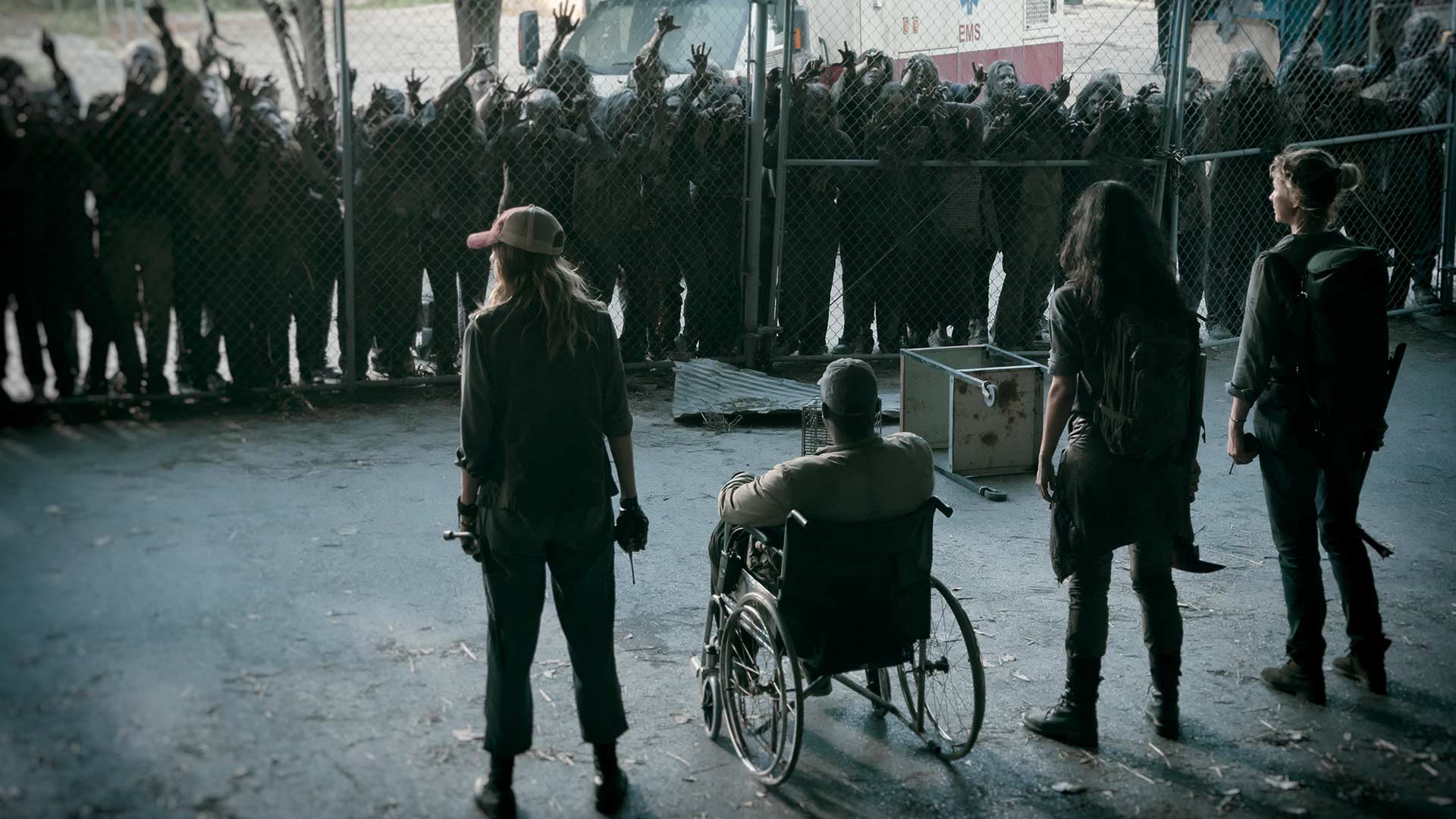 If Martha wasn’t so delusional she might have appreciated the irony that without the group’s help she wouldn’t be well enough to continue killing the ‘weak’ people. Morgan decided to be a martyr and he looked borderline furious the others decided to rescue him. But togetherness and hope were the main themes in the second half of the episode, now that everyone is reunited they’re clearly staying together. Even Jim got in on the action towards the end which was a surprise because his sullen attitude seemed to be leading to Jim trying to attack Morgan out of revenge. Instead he gets a hero’s death and while Jim won’t be a character people miss next season he at least got a nice sendoff. Everyone started the second half of the season scattered so having them all be a happy family again was the only conclusion. We can’t have a show with three or four main stories playing out over the season that’s too much ground to cover.

When they get back to Althea’s truck they discover Martha has escaped, they drive off and Sarah decides to name the beer she makes after Jim (Jimbo’s Beerbo’s). Everyone looks to Morgan for a plan about what to do next and he suggests Alexandria once they find Althea. Meanwhile Martha finds Jim’s body and turns him into her latest walker pet and plans to make Morgan strong too. Jim would probably turn over in his grave (if he was lucky enough to have one) if he knew what his beer was called. There’s no way Morgan is going to get everyone to Alexandria, not unless this show is being canceled and the two Dead shows are being merged. When Martha once again threatens the group let’s hope they’re smart about not trying to save her this time.

“You can’t do anything about the fact that you’re going to die Jim, but you can decide exactly how you want to go.”

Everyone decided the needed to save Althea but they sure drove pretty far from the hospital where she likely still was.

“Can I do the honors when you become a skin muncher?”

So the alligator disappeared which was a letdown it would have given John and Strand something to do while waiting for a rescue.