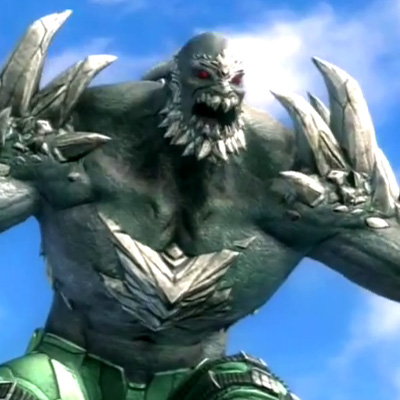 Superman. One of the world’s most iconic superheroes. His moral compass is nigh-unbreakable. He will not kill. He will not break the law. He doesn’t grandstand, or brag, or exploit his powers for personal gain. He is the role model for all heroes that succeed him. He is the ultimate hero.

But there is one glaring flaw. He’s too powerful. How can you stop a man who can crack a planet in half from sneezing too loud? How can any villain be a challenge to a being who’s practically invulnerable? Simple. You create Doomsday.

Doomsday was created by Dan Jurgens in 1992. Originally conceived as a way to inject fresh interest in the Superman franchise, Doomsday holds the singular honor of not only giving the Man of Steel the battle of his life, but actually killing him. After these events, Doomsday is swept under the rug to make room for the four super-powered “successors” that take on Superman’s mission in his stead.

However, you can’t keep a good villain down. Doomsday’s popularity allowed him to survive and battle Superman anew. Every comic book fan worth his salt knows that even a villain who can stand toe-to-toe with Krypton’s Last Son is nothing without a grand origin story to match. As such, the DC artists/writers do not disappoint.

Thousands of years before the Kryptonian civilization, the planet Krypton was host to some of the deadliest predators in the universe. Enter Betron, a somewhat unscrupulous scientist. Obsessed with creating the ultimate life-form, Betron deposited a baby into Krypton’s savage landscape. The baby, not surprisingly, was killed almost immediately by predators. Betron then took the remains, cloned the baby, and deposited the clone onto Krypton, where it would be killed again. The point of all this murder? To build the perfect killing machine. The clone developed the ability to become resistant to the manner of death used.

This is how you create a creature who can match Superman. For every wound inflicted on Doomsday, he returns stronger than before. Kill Doomsday via sonic weaponry? His ear canals closed. Lobotomize him via heat vision? His skull becomes too thick to penetrate. Doomsday is the monster that takes a licking and keeps on ticking.

The problem with Superman is always the problem with Superman: he’s too powerful. People get of a man who can destroy a mountain by hiccupping. Writers have to dig deep into their creativity to provide a challenge for the world’s most powerful superhero. Dan Jurgens’ contribution to that cause was Doomsday. Not only that, but Doomsday managed to live beyond the role created for him, encountering and defeating nigh-invulnerable foes (Darkside comes to mind). Insidious, maniacal, unstoppable, Doomsday is the perfect foe for Superman. Let’s just hope that he doesn’t get overused.

If you enjoyed Michael’s doom, you can find the rest of his work right HERE on Sci-Fi Bloggers. You may also check out his personal blog over HERE.