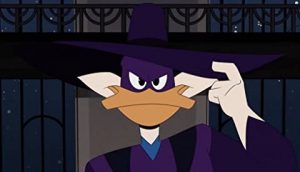 This Darkwing Duck Is So Good It’s Dangerous

If the scant episodes of DuckTales featuring Darkwing Duck are anything to go on, then the Disney+ remake will be excellent. The bits that we’ve seen so far are both love letters to the series and poke fun at the show’s nature.

But while we wait for that inevitable review, let’s discuss the two most notable appearances of the character(s) in the DuckTales reboot. Specifically, the episodes “The Duck Knight Returns” (S2, Ep16) and “Let’s Get Dangerous” (S3, Ep12). I’m aware he’s in other episodes, but these two have the most momentum for the character. 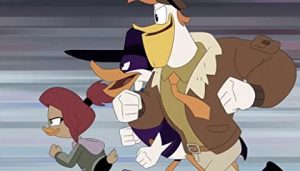 The Pacing Of These Two Episodes Are Masterful

And the first thing I want to cover regarding those episodes is how awesome the introduction of the character is. The concept of making Darkwing Duck a show in-universe that then slowly bleeds into their world (or not so slowly with the Ramrod), is genius. It allows the show to keep its own rules intact and yet expand into Darkwing Duck. The lore is new lore, but it’s heavily informed by the old lore.

And nowhere is this played to a more impressive effect than with introducing Negaduck—even if we haven’t gotten to him since. The meta-joke of having the original voice actor play Darkwing Duck’s actor who then goes insane and decides to be the Negaduck to the new version of Darkwing is fantastic. It’s so creative, so clever, and so wild a concept to put into a reboot that I’m still reeling. 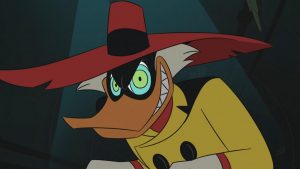 But that’s the short episode’s plot. Then we’ve got the big, multi-parter with our new Darkwing. Which is just brilliant across the board. I don’t think I disliked anything in this episode (except a weird southerner joke). They took the plot of the first episodes of the OG Darkwing Duck and reformatted it to have smarter writing, fan in-jokes, and much better action scenes. It’s clear how much love and care went into making this episode.

Like, let me break this down into sections, starting with Gosalyn. Here she’s perhaps a little too much like Webby but is an improvement on the old version. New Gosalyn makes a lot more sense as a teammate to Darkwing. She’s arguably more skilled at stealth and weapon usage. This Gosalyn also has a better emotional story regarding her grandfather, who was just casually murdered in the first version. She makes actual choices and sacrifices while leaving the plot open for the rest of the show to explore. 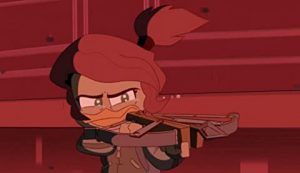 I’m Sorry, But This Is The Better Gosalyn Version

But what’s Darkwing without villains? We get the Fearsome Five with Taurus Bulba instead of Negaduck, so there was a lot of potential. I do have a few complaints, though. Bushroot is supposed to be mostly not evil, and this version of him does not speak and is horrifying. Quackerjack, on the other hand, is supposed to be insane and deranged, but he’s mostly in a robot and they make no Joker references with him, which is just a waste. But the biggest loss, mainly for the spinoff series, is all four get sucked into the portal at the end of the episode. I figured they would keep them around, thus allowing super villains to oppose both the new Darkwing and the already established Gizmoduck. It’s not like magic doesn’t exist in the DuckTales universe, so it’s not outlandish to have them around. The only speculation I have is that they maybe wanted to create new villains for the series or give them new origin stories like Darkwing. 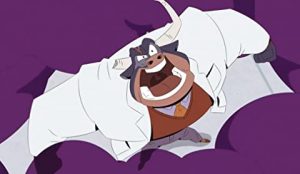 Hopefully, This Plot Line Is Not A Waste of Villians

Regardless, though I’m disappointed, the creators have earned my trust with these characters. I trust them to make something spectacular. They seem to have a solid plan—and the world they’ve built has plenty of tools. I never thought I would become this invested in a Duck Batman parody franchise, but it’s got too much in it to love. 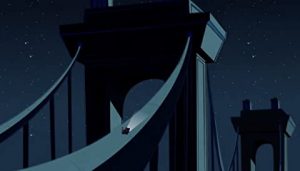