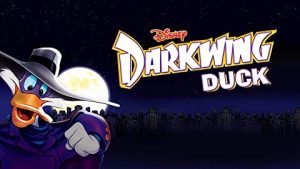 I can’t believe I need to say this warning, but the opening intro and several scenes of Darkwing Duck have bright, jarring lights. I don’t know if they would affect people sensitive to that sort of thing, but it’s worth mentioning for safety.

This is unfortunate for several reasons. One being because Darkwing Duck is a great show. I understand now why it has the fanbase it does, and why they bothered to include it in DuckTales. But it does have its flaws, and it does have its oddball aspects besides the light thing, so let’s go deep into this show. 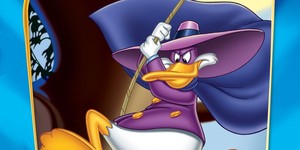 In the Spirit of Things, Let’s Review Dangerously

To start: the comedy, as it’s the weakest part. Darkwing Duck episodes seem to have only a few jokes to them. The first is that Darkwing Duck, the character, is constantly getting beat up and abused. This is mostly played for extreme slapstick, in an almost throwback to Tom and Jerry. I did chuckle at it, but the show does rely on the shtick a lot.

The second joke, though, is a lot better. It’s the raging ego of Darkwing, and how he’s somewhat aware he’s being watched. There are moments of him talking to himself, sure, but other times he’s looking right at the “camera”—and he’s not the only character that does this. Some aspects of the Batman-style dramatics take on a much more sardonic wit with this method. 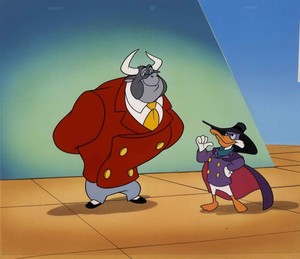 The Parody in Darkwing Duck Is Pretty Clever

And mentioning Batman leads us right into the other half of the show’s structure, and the reason it could hold my attention for several episodes: the superhero part. Darkwing Duck is right in step with other animated superhero shows, especially Batman: The Animated Series. It’s pulpy and melodramatic and exciting. There are guns, and violence, and off-screen death—several actually—within the first three episodes. The one misstep of it is inconsistency, however. The melding of genres leads to moments where what’s dangerous and what’s cartoony is up in the air. Taurus Bulba squashes DW like an accordion and it just hurts a lot, but later guns being pointed at him are a lethal threat. It’s not a big issue, though, and character reactions get across what is physically impactful and what’s not.

And with that, we get to the other main characters. Gosalyn has an adorable dynamic of being the first person in Darkwing’s life to care enough to keep him safe, but she’s rushed a lot in her first outing. The moment of him trying to sing her a lullaby is powerful, multi-layered storytelling, but it’s about all we get for them here. The show might have benefited from a three-parter, even if later episodes of the series picked up the slack. 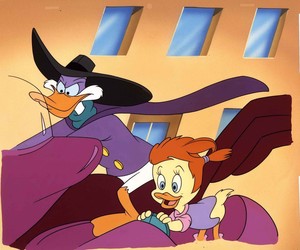 But the true truncation, the true rush-job, is Launchpad. I get that he’s a character based around a few jokes, and likely improves later, but I’ve been spoiled by his variation in DuckTales. There he’s got several hobbies, interests, and emotions beyond just fanboying. I think he also just works better alongside Scrooge than he does Darkwing.

But this is all in hindsight. This is with time to think. Most of my issues fall away when watching the show. Yeah, it can be dated, and it would not surprise me if some jokes have aged poorly, but the core remains wonderful. The trio is entertaining, the villains suitably campy, gimmicky, and hammy. The voice work across the board is awesome, even if I find Gosalyn a little too high pitched at times. 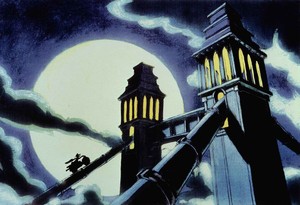