As I’ve whined and moaned about before, it’s hard to be a show that’s not a police procedural on television these days. Especially if it’s not totally based in reality. So even though fans were so rabidly invested in NBC’s Constantine, it still only lasted thirteen episodes. Matt Ryan played the supernatural investigator in the series, and it won’t be the last of him.

The creators of the show shopped ferociously to different networks and platforms to be picked up, but in the end no one came to the rescue. Instead, Ryan will once again portray John Constantine in an episode of the upcoming season of Arrow. The episode, entitled “Haunted,” involves the Lazarus Pit and the repercussions of Sara Lance. 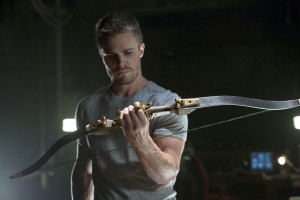 Originally, Stephen Amell, who plays Oliver Queen, or the titular Arrow, stated that he was going to appear on Constantine. He mentioned in an interview, “The reason that I was going to guest star on Constantine, at least the idea that we were throwing around, was [Constantine’s] an expert when it comes to the Lazarus Pit, which is now something that is a part of, and will continue to be a part of, Arrow.” Sure, maybe that’s why. Or, it could be the fact that DC Entertainment and NBC can sense when a show isn’t doing phenomenally well and creating a crossover event with the star of one of the most successful shows on television would be well worth it. If the show could create a quality episode featuring Amell it could ramp up ratings and get the networks’ attention and maybe another order of episodes which could lead to another season. Unfortunately, that won’t happen, but it’s a nice gesture to feature Constantine on Arrow. The show’s producers insist that it’s a one time only thing. So stay tuned, the trench coat returns.

The Trench Coat is being dusted off. #Constantine#Arrow@CW_Arrow@amellywood looking forward to it. #thisfallpic.twitter.com/fROWx4RJ9o

If you enjoyed Carly’s trench coat, you can find the rest of her work right HERE on Sci-Fi Bloggers. You can also follow her on Twitter @MrsCarlyRodgers.