While organizing a manhunt for Barbie, Big Jim is told about the mini dome by Dodee (played by Jolene Purdy), who regained her memory of it. Dodee picks up a military transmission wherein it is clearly said that Big Jim has been murdering people, so he kills her and burns down the station, again blaming Barbie. Under the impression that the mini dome could bring down the large dome, he is determined to find it so he won’t face punishment for his actions from the outside. 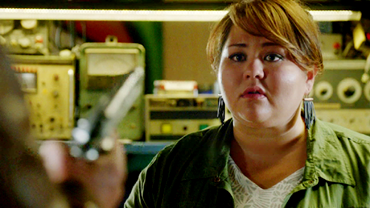 After weeks of Big Jim trying to hide behind the mask of a good person, it’s great to see his inner psycho let loose. I wonder how he plans to keep killing people after he doesn’t have Barbie as a scapegoat anymore. Dodee’s death was not sad or shocking. It felt like it was done simply for the show to kill off a main character. But at least she got to go out with a pretty decent death scene.

Julia (played by Rachelle Lefevre) has been in a coma since being shot, but that’s the least of her worries. Since Big Jim told everyone that Barbie shot Julia, he’s had Junior (played by Alexander Koch) guarding her so that if/when she wakes up he can take care of her. Angie (played by Britt Robertson) uses Junior’s crazy crush on her to distract him so Barbie can move Julia someplace safe. Meanwhile, Big Jim has Joe (played by Colin Ford) and Norrie (played by Mackenzie Lintz) at the police station. He’s trying to get information on the mini dome when Barbie turns himself in to save them. Big Jim offers their safety for a public confession but Barbie decides to stick it to Big Jim and pleads not guilty.

Barbie may be a wanted man, but I don’t understand why Angie didn’t go find Linda (played by Natalie Martinez) and bring her to Julia. With the fast rate at which Jim is gaining power, they only have a limited amount of time to get the truth out. It also made no sense that Barbie didn’t at least mention that he had proof of his innocence when he was in front of the town. He didn’t have to mention Julia specifically, but just saying “I’m not guilty” won’t convince anybody. 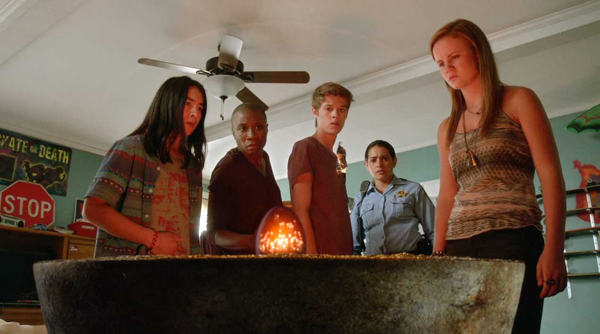 Finally, the mini dome is doing something new. It’s letting out a piercing, screeching sound. The Monarch butterfly inside starts moving and the egg starts to glow and it looks like it’s about to explode. The mini dome storyline has been slow moving and I can’t wait for it to be resolved and over with. I hope that along the way it ties up the mysteries of the pink stars and who is supposed to be the Monarch. At the very least, there had better be a major plot twist involved with it that will cause a huge shake-up for the show going forward.

“You’re a sick bastard, and one day everyone’s gonna know it. And they’re gonna smile when you die.”

Turns out Norrie is a real scrapper. Who knew?

“So why do they call you ‘Big Jim’? You’re just some loser trying to scare kids.”

I hope the mini dome explodes and we never have to see it again.