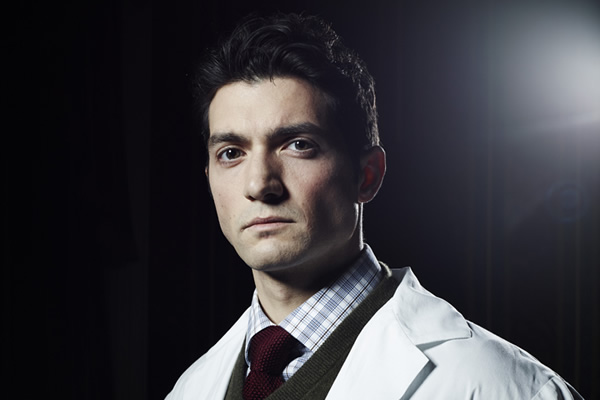 The bad guys are always freaking neck and neck with the good guys in this show. It’s driving me crazy! Every time you think the good guys are going to get the upperhand, the bad guys pop up from around the corner and pull the rug from beneath them.

Guys, we need to find something solid!

Alison and Vanessa have spent these two episodes trying to latch Darius’ name to the entire debacle. In episode seven, James takes a trip to the Kessler vacation home on St. Michael’s Island. The plan is kind of a failing success…if that makes sense. James taps into his Sonic speed and manages to get the documents sent to Alison, but it may have cost him his life. Episode eight opens with James in a hospital bed heavily surrounded by security, leaving Alison with no way of seeing him.

So, what a better way to avenge his almost-death experience than to find out the truth?

By the way, anyone else curious about the fuel that’s keeping Alison interested in this? She’s not the most personable chick on The Lottery, so it can’t be for the good of all mankind. Are you guys buying this “trying to save the world” bit? I figure she’s either still burning up about that whole hostage situation from the beginning of the season, or her thirst for knowledge has no bounds. She has it in for Darius, regardless. 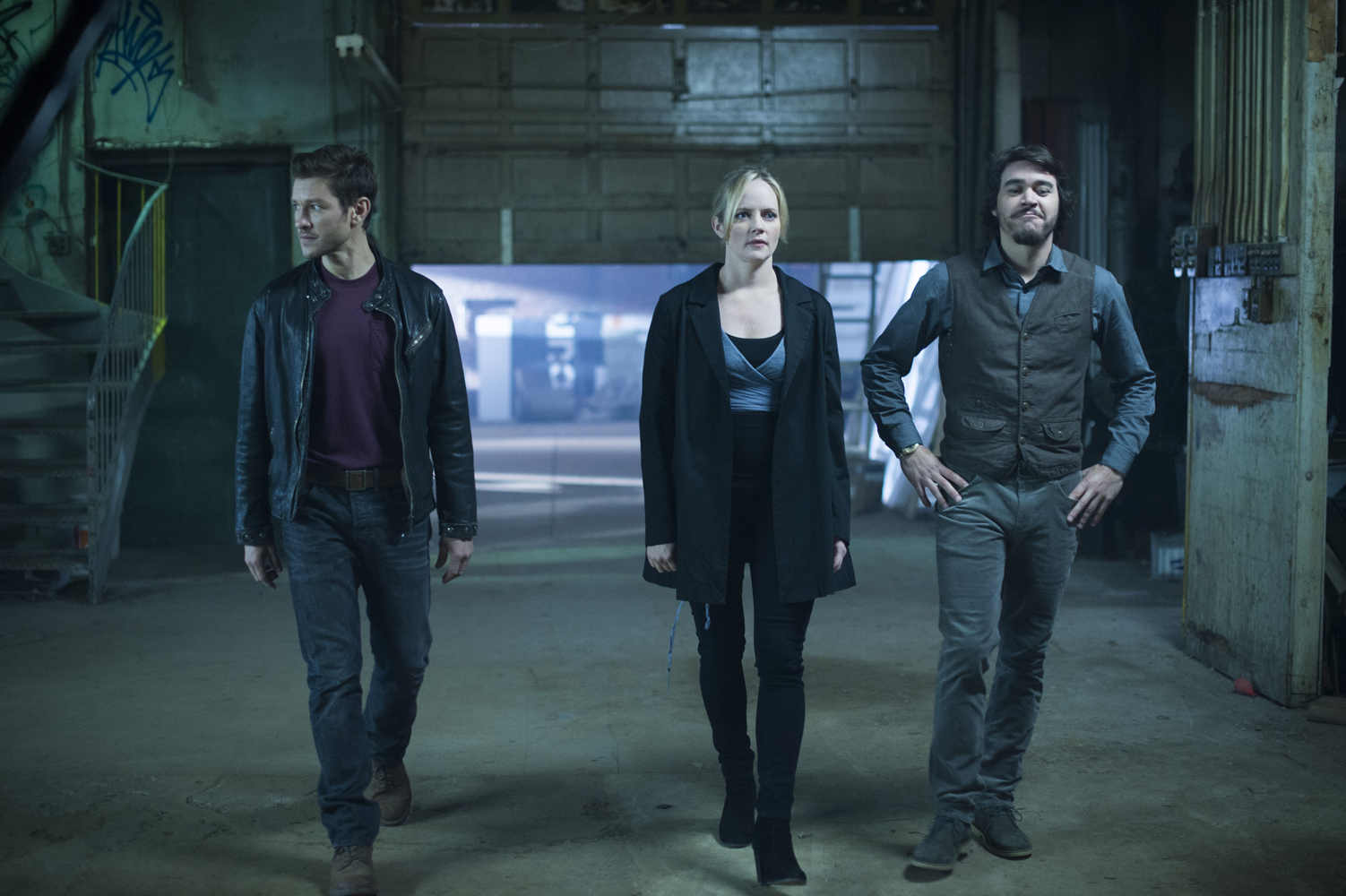 Anyway, Vanessa and Alison try to uncover information from the documents, but, as always, brick wall. Apparently, Kessler pursued the fertility thing for research purposes, but there was an outside influence, an unknown government official under the pseudonym “Torrentino,” who pressured Kessler to turn the research into a weapon. Before his death, Kessler had been building a case against Torrentino, but there’s too many loose ends, and Vanessa can’t stay for the long hall. She has to deal with the mess Darius is making in the White House.

We already know that Darius is planning to kill the president and, FINALLY, Vanessa does too. She has also found out that the Vice President and the Chairman of Joint Chiefs are in cahoots with Darius. Vanessa thinks the key to putting a stop to it (or at least prolonging it, so she can pin everything on Darius) is to change the venue. It’s a no-go. Darius coils the First Lady around his finger and she backs up his decision to keep the hotel as the venue.

That isn’t even the most scandalous thing. Vanessa has struck up an interesting…friendship (?) with Darius’ daughter, Rose. The juicy bit about this is that Rose overhears (I think) Darius’ plot to kill President Westwood. She looks to Vanessa as a confidant, but Vanessa isn’t able to get any info out of her flighty behind! Darius takes Rose’s phone and bamboozles Vanessa into going to their house in Crystal City.  JUST WHEN WE WERE GETTING SOMEWHERE…but no worries yet. I think Darius just wants to pick Vanessa’s brain about his daughter, but you can never tell with Darius. He’s a heavy hitter. Vanessa needs to step it up. I bet he’ll plow right through everyone until the contestants are in his little concentration camp and there are tanks rolling around all over America packed with guns. Vanessa is clearly not intimidating anyone! Darius is more concerned with his daughter than anything Vanessa is doing (I’m actually thinking he’s planning to implant one of the embryos in Rose, but we’ll see). This man clearly has more than the tricks we’ve seen up his sleeves.

In other areas, Kyle has a few problems. He meets with the May Twos and, of course, it’s isn’t just a straightforward nab-and-grab of Elvis. These guys are the real deal. They have undercovers in direct contact with Kyle’s son and probably a means to get Elvis out of the institution anytime they want, but they want something in return. It’s a something that could potentially put Alison in a very delicate situation, especially with the newfound Kessler information: her phone. Yeah, the phone that James sent all the Kessler goodies to.

I have to say, Kyle surprised me.

I knew that he was going to use his manly man charms to get Alison into bed, I just knew it. Of course. Kyle has been pimping himself out for YEARS. What’s one more romp in the sheets to get Alison’s phone? Plus, what woman on this planet can fault Alison for falling for those muscles and those eyes and that hair and that jaw structure? Any woman would crawl into that man’s arms. Incidentally, we find out that he actually has morals. Who knew?

He doesn’t hand over her phone and even goes to Alison with the information that the May Twos want the embryos. Alison seems on board, probably because Vanessa left her hanging, but if you guys remember correctly, Alison’s last attempt to kidnap the embryos was an enormous failure! 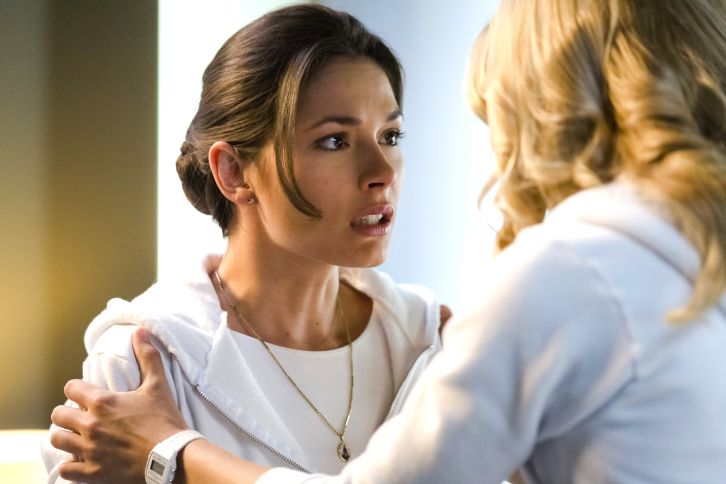 And can we talk about Perry? I’m not too interested in this storyline, so bloop, it’s at the bottom. I knew First Lady Gabrielle wanted Perry’s baby, I knew it! Why else would she be offering so much help and “constructive criticism” to Perry but not the other girls? The thing that raises my eyebrows the most is the fact that I honestly don’t think the First Lady likes her, which means Perry will fall into the disposable category. Couple that with the desperate need for motherhood and you’ve got a pretty good conspiracy theory.

Perry’s roomie overdoses on some pills because she couldn’t handle the truth about her virginity lies coming out during the mandatory lie detector test. Uh, yeah, bye girl. She wasn’t really interesting to me. I mean, what was that? Breakdown #2? Ya’ll don’t get that much camera time as it is! That said, she may have not killed herself. Perhaps Gabrielle gave her something stronger than sedatives?

It’s madhouse over at Lifetime. My one complaint is that this is going a little snailish. It’s making me crazy. Like, when is Vanessa going to pull the rug out from under Darius?!