Season two of Once Upon a Time decided to take its format in a different direction by splitting into two volumes. The idea itself was good but the execution left something to be desired.

The first half of the season deals with Snow White/Mary Margaret (played by Ginnifer Goodwin) and Emma (played by Jennifer Morrison) being trapped in the Enchanted Forest after falling through a portal. They get help from Mulan (Jamie Chung) and Sleeping Beauty, aka Aurora (Sarah Bolger), who were among a few people left behind when Regina’s (Lana Parilla) curse was cast. This mystery is, thankfully, solved quickly: Regina’s mother, Cora (played by Barbara Hershey), sealed off a section of land from the curse and trapped it in time until it was broken. Cora and Regina mostly wanted to kill each other, but when Cora found out Regina only wanted her dead because she loved her and considered that a weakness, she did what she felt was necessary. She figured that, by the end, once the curse was broken that is, Regina would have nothing left but her. 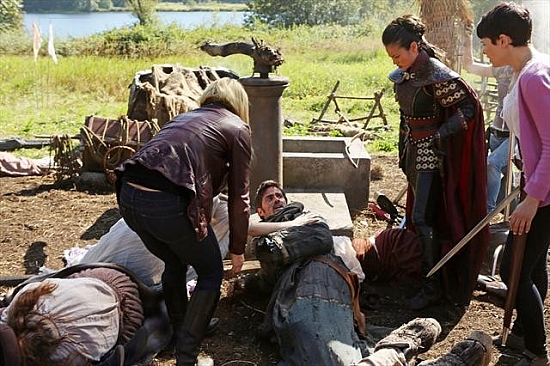 The first half of the season had a great storyline. Seeing Snow back home and Emma exploring the world she would have grown up in was fun to watch. However, it stopped being interesting about halfway through because it was dragged out too long. The two of them getting home felt purposely delayed just so the plot would last until the mid-season finale. Mulan was awesome in her movie but in the show she was very moody and one-dimensional, basically as cold as the armor she always wore. Cora was a great addition to the cast and she shared Regina’s love for snarky comments and great wit. I was confused as to why everyone didn’t revert to using their real names after the curse was broken. Perhaps, after twenty-eight years, Mary Margaret decided she preferred that over being called Snow White.

One big problem with the storyline was the Room of Fire associated with people put under the famous Sleeping Curse. Apparently during—and sometimes after—it, they visit this void between life and death and any burns caused by the flames affect you in real life. Sleeping Beauty uses this to communicate with Henry (Jared Gilmore) to help get Snow and Emma back to Storybrooke. My issue is that this room was too convenient to get them back and was randomly brought up in one episode. Several people were put under Sleeping Curses last season but it was only now that anyone began entering that room, let alone remembering that it existed.

Easily the best new character introduced this season was Captain Hook (played by Colin O’Donoghue), the pirate bad-boy from Peter Pan, who made a great antihero. His backstory was weaved into the narrative by making the crocodile that took his hand be Rumpelstiltskin (Robert Carlyle). Hook fell in love with Rumple’s wife when he was human and Rumple killed her for it, so now Hook wants revenge. Hook integrated with the main characters pretty well and could make a good long-term character for the show. I’m also really interested to see what changes have been made to his backstory with Peter Pan. 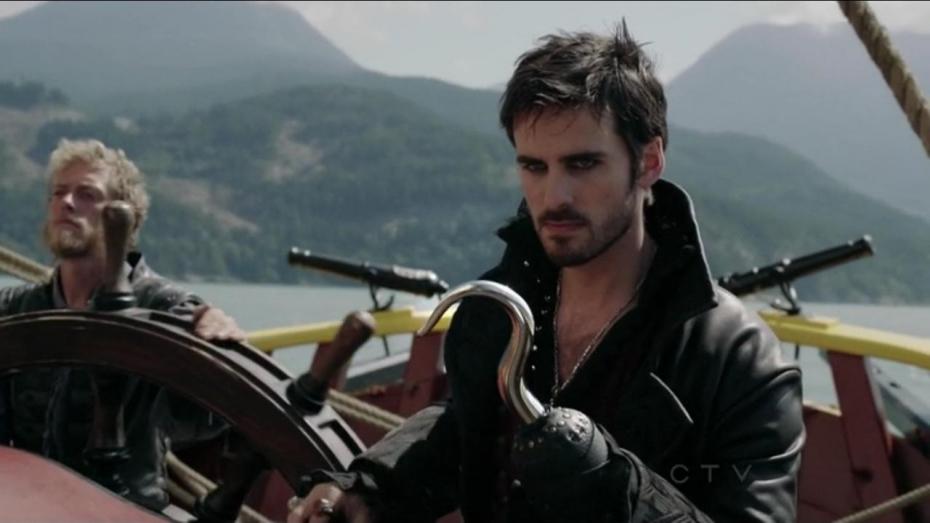 I’ll have you hooked on me.

The second half of the season begins with Cora alienating Regina from everyone by framing her for murder and reeling her back to the side of evil. Their master plan is to steal the dagger that controls Rumple and use him to kill their enemies, but Snow takes out Cora first by tricking Regina into killing her. Snow feels regretful almost immediately and begs Regina to kill her, but instead Regina rips her heart out of her chest (a trademark for the show) and indicates a dark spot growing on it. Killing Cora was apparently so evil it caused Snow’s heart to turn just a little black and Regina finds that irony more satisfying than killing her.

Cora was a great villain for the show and I felt that her backstory wasn’t as developed as it should have been. She was the infamous Queen of Hearts who ruled Wonderland, but that was only briefly shown in a flashback. We don’t know how/why she became the Queen or if she ever interacted with Alice, which is a shame because it would have been fun to see a new version of that story. I found it hard to believe that Regina would so easily turn back to being evil, given how hard she worked to be good to be with Henry. It seemed equally implausible that everyone so readily believed she had committed murder. Snow White feeling so guilty—for killing the witch who threatened her family—that her heart turned black was ridiculous. Should she first resort to using words to reason with the next villain who shows up? 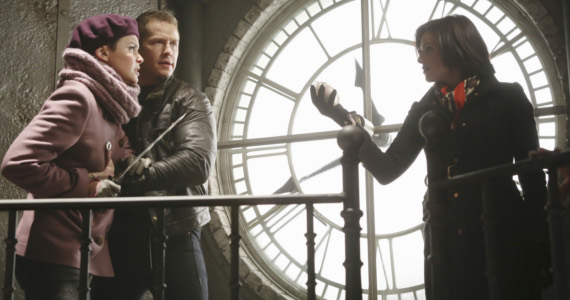 I’m evil again, deal with it.

Bad parenting was a recurring theme this season and Rumple was reunited with the son he abandoned to face up to his actions. When Baelfire, aka Neal Cassidy (played by Michael Raymond James), fell through a portal he landed in, of all places, the real world, and of all people he met Emma as an adult and is in fact Henry’s biological father. This wasn’t much of a shock since that twist was heavily implied back in the beginning of the season. I thought that was great if for no other reason than the complex family dynamic that brings to the table. Having Rumple and Snow White as grandparents with the Evil Queen as your adoptive mother would make a great Thanksgiving dinner.

The major storyline in the second half of the season revolved around a stranger named Greg Mendell, aka Owen Flynn (played by Ethan Embry), crashing his car through the town barrier. Everyone is concerned with keeping him in the dark about who they are, but he already knows because he has already been to Storybrooke. As a child, he and his father were stranded in the town when it first appeared and Regina, after taking a liking to them, tried to force them to stay. While Greg escaped, his father wasn’t so lucky. Greg made it his mission to take down Storybrooke and find out what happened to him.

This was a great storyline, but it wasn’t as great as it could have been because of how it was executed. In the first few episodes Greg was in, he would have maybe one scene and was actually pretty isolated from most of the characters. His was a storyline that felt like it was being sidelined in order to last until the finale. While his mission to find his dad was a relatable one, Greg as a character wasn’t relatable because we as the audience barely get to see him on screen.

Rounding out Greg’s storyline is a woman named Tamara (played by Sonequa Martin-Green) who also wants to destroy magic, however her reasons are never disclosed. She uses being engaged to Neal as a cover to get herself to Storybrooke and find a way to end all magic. Tamara was a completely unnecessary character because Greg was all that was needed for the plot of destroying magic to work. Her backstory was also never explored. We never learned why she wanted to destroy magic or even how she met Greg. Tamara overall felt like a dead weight that dragged down the momentum of the show. 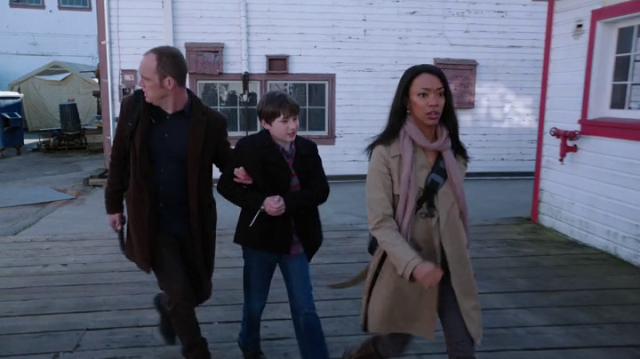 The finale culminates with Greg and Tamara detonating a magic trap Regina put in place in case the curse didn’t work out for her and Storybrooke is nearly destroyed. Regina and Emma (using magic she apparently has) save the town but realize it was all a ruse for Greg and Tamara to kidnap Henry who was their real target. They use a magic bean to take him to Neverland (or the “Home Office,” as they call it) because Peter Pan is an evil little boy who, for whatever reason, wants Henry. The season ends with everyone boarding Hook’s ship and sailing to Neverland to confront Peter Pan.

Emma’s magic powers were barely touched upon, which is disappointing because I want to know what powers she has and where she got them. I’m hoping we’ll learn more about them and get to see her use them later. The Neverland story looks like it could be very cool, but it doesn’t make sense that Greg and Tamara would take Henry there. There isn’t any way I can see either of them ending up in Neverland and they surely can’t believe they can end magic in one of the most magical places in fiction. I hope these are all addressed next season and that the Neverland story arc is a lot of fun.