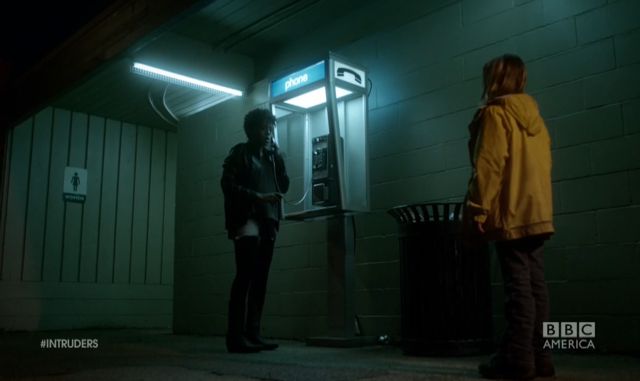 “Didn’t your mom ever tell you not to pick up hitchhikers?”

We’re going to start calling our creepy little girl Marcus, since only flashing images remain of Madison. Incidentally, Marcus is so much more interesting and less confusing than Amy.

We finally see him in a more appropriate body, an old man Shepherd has been sent to kill. Instead of finishing the job, Shepherd walks away with a big bag of money, agreeing to bring Marcus back when “The Nine” least expect it. Except, as little girl Marcus stated in a previous episode, “You brought me back too soon.”

Marcus is terrifying. Why is it that when a child is evil it’s a hundred times more terrifying than an evil adult? He reveals in the car that he was in the orchestra in 1791 during a premiere performance of Mozart’s “Ave Verum Corpus” (translation: “Hail, True Body”) where a girl was murdered and the killer was never found. Could this means that Marcus was the murderer? He certainly seems capable.

And by the way, Ave Verum Corpus is the title of the next episode.

Well, Marcus left his hitchhiking companion dead in a rest stop bathroom and evaded Shepherd once more in his desperate scramble to get to Seattle.

Amy is super confusing. I’m glad we’ve finally ended Jack running around searching for her, because that was getting seriously old. But who is this person that he found? Remember the phone call: “Even if you find her, Amy’s gone.”

She appears to have Amy’s memories and even knows how to fight with Jack about how he never listens to anything that has to do with her life and her job, so is a bit of Amy still in there? She tells Jack that she needs a separation, but not from him because he is her “shepherd.” She needs a separation from herself.

Does Amy need Jack around to help her transition from the body swapping? Did Jack somehow know the Russian that is now inside of his wife? What exactly happened in LA to make Jack leave the police force? All we’ve seen is him sitting in a chair, waiting, and then shooting three men who walk in. Amy obviously came in to comfort him while being debriefed and that is how she is his everything.