In the Buffyverse, Halloween is a time when demons and vampires take the day off. They prefer to steer clear of the marketed attempt to glorify things that go bump in the night and avoid silly costumes. While Buffy mourns her first college one-night stand, Giles encourages her to go out and have fun, just like himself.

Little did Giles know that we really were about to see fake, plastic monsters come to life.

The Scooby Gang decides to hit up a frat party where you have to get through a haunted house to reach the attic. That’s where the real party’s happening. One of the guys in the fraternity found a super neat symbol to paint on the floor! Cool! Until Oz accidentally cuts his finger and drips a little blood on it, activating a fear demon named Gachnar.

All of their fun little plastic bats, spiders and skeletons turn real, and things just get scarier. When I first saw this episode, it freaked me out so much that I had to hide under a blanket. I mean, this guy who cracked his neck came back and raised zombies out of the ground. He was less cuddly than most network TV characters.

The house separates each member of the group and they begin to experience their worst fears. Willow is afraid that she will lose control of her magic, Buffy is left alone with only the dead, Oz fears that he might lose control of his wolf side, and Xander feels that he’s becoming useless as his friends move on in college.

I’m especially in love with Anya’s “terrifying” costume as she comes to the rescue.

Giles wielding a chainsaw was definitely the cherry on top.

So we all make it to the basement where the symbol is drawn and Buffy decides to do the smash, the slayer smash, which just brings the demon to its corporeal form. It’s super terrifying because of, well, camera angles.

Gachnar: “I am the Dark Lord of nightmares, the bringer of terror. Tremble before me! Fear me!” 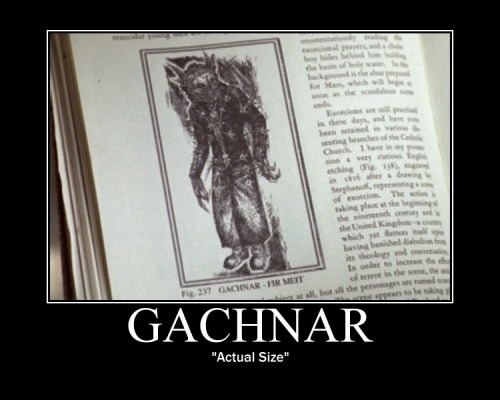 And thus ends another wonderful Halloween special brought to you by the slayer of vampires, Buffy and her gang of Scoobies. Complete with demons, zombies, fear demons, smooshing the fear demons, and a candy binge at Giles’s place.