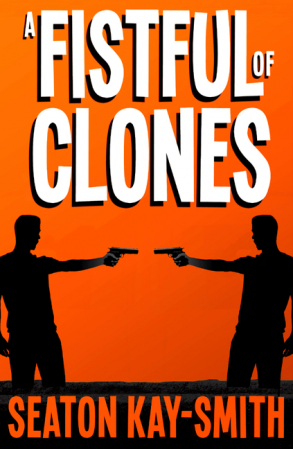 When I write a review for a book, I often start off with a hypothetical question. One that pertains to my general feelings, and serves as an easy way to pull you, the reader, into my mindset while I was reading the book. And A Fistful of Clones is no different, because this time the question is: “Can you empathize with a character too much?”

Because you see, dear reader, the main character in this book is too much like me, or rather what I used to be like. Not exactly, mind you, but close enough that I could see his line of reasoning even as it spiraled him into the situation he ends up in.

In fact, the character of Henry is so beautifully and effortlessly real, that I think he might be an author self-portrait. Either that, or his creator is a true master of characterization, because not only does he talk realistically, he also acts realistically. Full of tiny mannerisms, non-sequiturs, and misunderstandings, he is so cut from life that you could slap him across the face, and in fact, you might just want to during his more idiotic moments.

But this story is a partner dance, a waltz if you will. And while it has a myriad of supporting players within its pages, the true secondary character is the narrator, whose witty and often hilarious observations are nearly as much fun as the actual actions that take place in the story. The prose as a whole is just constantly a joy to read, and it prevents any of the heavier subjects of the narrative from breaking the madcap story.

Because, make no mistake, this story needs the levity. It’s dark. Seriously dark. Concepts like murder and loneliness and becoming unattached get explored with frequent regularity, and if it wasn’t for the author’s use of dark humor and Hitchhiker’s Guide to the Galaxy levels of silliness, this book would not be nearly as good.

But it is good, it’s really quite good actually, and I think the main reason for that is that it’s simple. The premise plays out exactly the way that you would expect it to. This is not a story of twists. Instead it is an exploration of a single human being. A human being who gets duplicated, but still.

I know I’ve already spent a paragraph harping on how impressed I am at the realism of the main character, but it bears another repeat. One of the most basic laws of good storytelling is that the characters need to carry the story. And that is often something that gets messed up, sometimes to a spectacular degree. So when a book gets that right, then I can declare it good. And when it’s clever, and funny, and paced well, and perhaps most of all, honest, I can declare it great. And even if it might have a few flaws, and not explore some interesting concepts as far as I would personally have liked, I can even go so far as to call it excellent. It does so many things right that it outshines all its faults.

In a short sum-up, this book is a piece of candy: small, sweet, and full of flavor. It’s dark fun from beginning to end.

If you enjoyed Brandon’s fistful of words, you can find more of his work on his website, Coolerbs Reviews. You should also take a look at his many short stories in our Friday Fiction category.