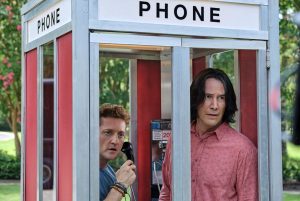 I was a fool to underestimate Bill & Ted Face the Music. I knew that the original movie, by reputation, was shockingly fun with an irreverent sense of humor. That despite the two main characters being stereotypes, there was something special about this series.

But still, my cynicism won out, and I was not prepared for how good this movie was.

Because this movie is fun. Remember fun? Bill & Ted is joyous fun and very funny. 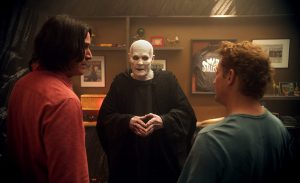 What stands out about it is that it’s humorous without being crude. No gross-out jokes. Almost no cringe humor. Mean spirited jabs rarely rear their heads. It’s just clever writing and goofiness.

Like, the only annoying character is maybe the robot, and even he gets great laughs.

This is because the movie, like Deadpool, leans into its absurdity. But, unlike Deadpool, plays it all straight. It is a bold-faced madness parade but presents it as just how this world works. It’s charming and heartfelt. Engaging because it’s imaginative and paced well. The main plot of a song uniting the entire world is ridiculous, but the movie somehow even makes that worth cheering about. 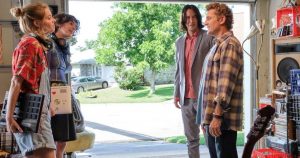 Bill & Ted Face The Music Does Not Really Misstep

It’s baffling, but every seemingly detrimental thing redeems itself. The daughters of Bill and Ted, which in almost any other context would feel like a cash grab, works here as a plot detail. The CGI is by far the worst part of this movie, but even that looks so fake it’s delightful.

Bill and Ted Face the Music is just too charming, too upbeat, too funny, and too self-assured in its own antics for traditional criticism. If you’re willing to groove with the ludicrous plot and characters, then you are in for a film experience that will make your day brighter for seeing it. 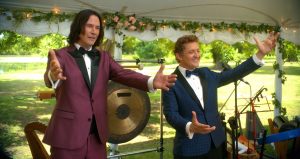