It came earlier than I had imagined it would: the execrable DC-wide tie-in issue. Grayson #3 is yet to be; this is the Grayson: Futures End one-shot. Staring at its cover, with Futures End emblazoned on the very top, and the big, white “#1” in the place of a “#3,” I found myself grimacing.  Why couldn’t they give this new series a chance to fully establish itself before dragging it into the mess that is Futures End?

In preparation for reading this issue, I ran out on a secret mission of my own. I needed to know what Futures End entailed. A very friendly employee of one of my local comic books stores was kind enough to fill me in. Futures End, she explained, isn’t a crossover event (like I had assumed), but rather a separate series that is running weekly. I may have made a face at that ridiculous concept, but nodded for her to continue. The storyline apparently involves old Bruce Wayne sending Terry McGinnis back in time to stop a disaster in the making (e.g. it’s Terry’s past, but five years into the future for Dick and crew). Futures End also follows Forever Evil and the big baddies are Earth-2 Borg-like creatures. The first issue was also apparently horrible to the point of being infamous. Frankly, it sounds like a hot mess that this cranky comics blogger isn’t going to touch with a ten-foot pole. 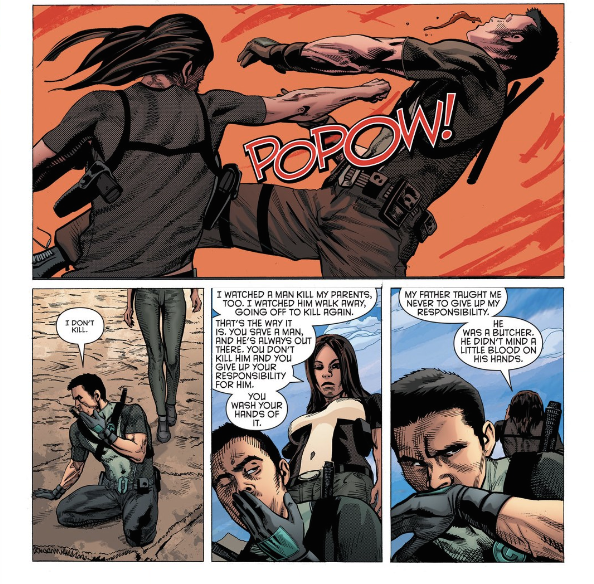 I am, however, grudgingly attached to Grayson by now, so I had to know the extent of the damage. My source of knowledge continued, telling me that the forty-one DC one-shots that fit under the Futures End heading all take place five years in the future, at the time of the conflict with the Borg-imposters. That said, they may or may not actually contribute to the main storyline. For instance, Superman’s issue is really key, but Swamp Thing’s is not. I nodded in understanding, thanked her, bought some comics because it’s a comics store, and left.

I was infuriated. Not only is this month’s issue not Grayson #3, it’s a one-shot that may or may not even matter to the title dominating its cover. But my comics rage made me realize that I had come full circle on this series. I no longer wanted to dislike it. Rather, I was rooting for the series now, and was desperately hoping that this issue wasn’t a waste of the trees it was printed on. So, reminding myself that the Twitter buzz has been very positive about this issue and that that has to count for something, I steeled my heart and started reading.

And, despite my misgivings, it happened again. I finished the issue, sat back for a moment, and then began flipping through it to reread bits and check certain pages to confirm the connections that run throughout the story.  More than not being disappointed, I was pleased. I had enjoyed this far more than I ever would have guessed. So how did King and Seeley do it? 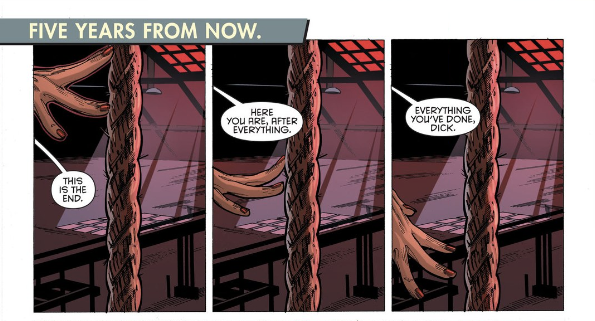 One: They treated it as a one-shot, but not a throwaway story.

Every story in a series matters, because issues are limited and the creators are asking people to pay their good money for every issue. This is precisely why the idea of dedicating a month—a whole issue of Grayson—to another story I don’t care about made me so disgruntled in the first place. But the authors wrote a one-shot knowing that it was such, and took advantage of that. Current Grayson storytelling techniques didn’t matter, so they took the opportunity to be creative and wrote the story backwards. Current Grayson plot didn’t matter, so they pulled in any characters or facts that they wanted so that the story worked. They used the 20 pages of one-shot space to address themes and issues that Grayson also dabbles in, but they did so in a more forthright manner because they didn’t have to work around action sequences and plot twists.

Two: They used the required setting for what it was worth, but recognized that its details didn’t matter.

As much as they worked without current Grayson plot, the writers also used only what they needed from Futures End. This move really helped alleviate my annoyance, because it was clear that they cared more about Dick Grayson than they cared about the bigger DCU. The pieces that we see of the larger conflict matter to the story in that they affect Dick, but the horrors that motivate him could have been caused by anyone. For better or worse, it could have been a conflict of any kind and the outcome probably would have been the same. Readers don’t have to know anything other than this happens five years in the future and that the world has drastically changed. We can figure out everything else with a little bit of brain power and what we know of the characters. 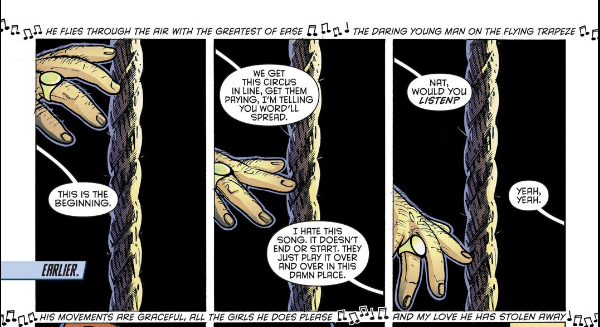 Three: They kept the story focused and character-based.

Because of points One and Two, King and Seeley relied on characters to move the story forward. Or backward, since the story is told page by page moving back in time.  (Their use of chronology in storytelling is probably better done than that of the main time-travel-based Futures End series.)  Each page of this issue is an interaction or moment in which we learn something about Dick. Helena Bertinelli is usually there because of her relationship with Dick, and the way they learn from each other, make up key portions of the issue. Their missions also serve as moments to remind Dick of his former escapades with Batman. The abnormal storytelling technique is rendered easier to handle by focusing the story with a few themes, recurring images, and characters that act as foils for each other.

I really appreciated the fact that, though the pages may have had the appearance of random bits from someone’s life, they actually built upon each other in a structured fashion. If nothing else, this comic is a great example of knowing the rules in order to bend them in an effective manner. I don’t want to say much about the plot because, honestly, it consists of only a few actions and decisions, but I can say that this issue turned into an examination of what it might take for Dick to kill someone. It’s a story of long-reaching causality, conflicting kinds of responsibility, old loves and new, and the Boy Wonder as a man in a future one wishes he never had to see.

Grayson: Futures End #1 is written by Tom King and Tim Seeley, with art by Stephen Mooney.