The second issue of (formerly) Nightwing’s new series, Grayson, seems to prove that Issue One was not a complete fluke, much to my surprise and grudging approval.  The first one still stands above the second in terms of making every panel count; despite the fact that the first chapter was shorter by two pages, it felt like more happened.  This second installment is less frenetic than the first and less flashy in terms of layout and action sequences as well. But that’s probably as it should be, because Dick Grayson (Agent 37) and Helena Bertinelli are doing a bit of investigative work, and the readers are also gaining access to information about what precisely it is that Dick is doing within Spyral. 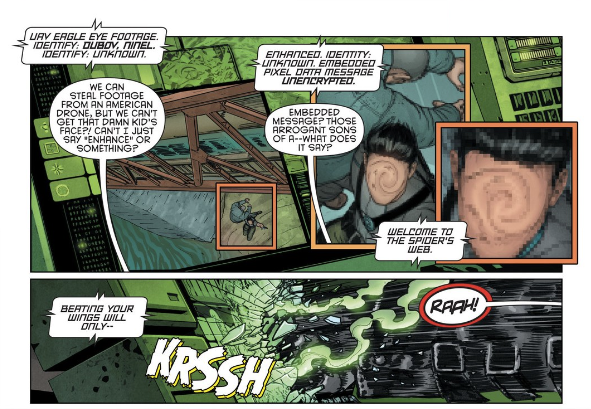 Midnighter mulls over what to do about Spyral’s newest agent.

This issue opens on the grounds of St. Hadrian’s, an all-girls academy and the secret site of Spyral, with Matron Helena drilling her charges in archery. Suddenly, a caped figure appears among the girls’ targets. It’s a Spyral operative called The Hood, and he’s been gravely injured, only just managing to stumble his way back to base. Meanwhile, Dick is communicating with Batman again, filling him in on the fact that Spyral is apparently into retrieving super-biomechanic (powerful organs) and that he has yet to get anywhere closer to the identity of Mr. Minos, the swirly-faced head of Spyral. The very same mysterious leader then summons Dick and Helena, and tells them that Hood was in the midst of tracking down what amounts a super stomach (I’m not kidding). He says Hood was attacked by whoever is guarding the item and now the head of Spyral wants Dick and Helena to handle it.

Midnighter, who made his first appearance while observing Dick from a cliff, shows up again in this issue. It appears that the Hypos implants that Spyral agents have make it so that, mask or not, opponents and various recording devices cannot remember an agent’s face. This solves, in a properly wild comic book fashion, my doubts about the safety of an outed superhero serving as a secret agent. But this fact is enraging to Midnighter, who has a “meat computer” of his own. Though he hates the fact that he was biometrically altered in the past, he finds it even more annoying that his enhancement isn’t helping him against the young Spyral agent he met on the train. It becomes clear that the project in which Mr. Minos is interested, is also something to which Midnighter is deeply connected. We can expect that he will continue to dog Agent 37 as this series continues. I do wonder if they may end up working together though.

Helena and Dick proceed with their mission, which I won’t spoil for you, and return to base. But a couple of actions that Helena takes have me slightly worried (in an excited way) for Dick’s control of his situation. His conflict with her during the mission also remains refreshingly true to his character, simultaneously pushing the story into the territory of gray-scale morality that I predicted it might enter. Dick ends the issues by calling Batman again to report on the mission and, oddly, recalls a memory of when he was with other members of Batman’s make-shift family. I can only wonder if there might be something hidden in this recounting. 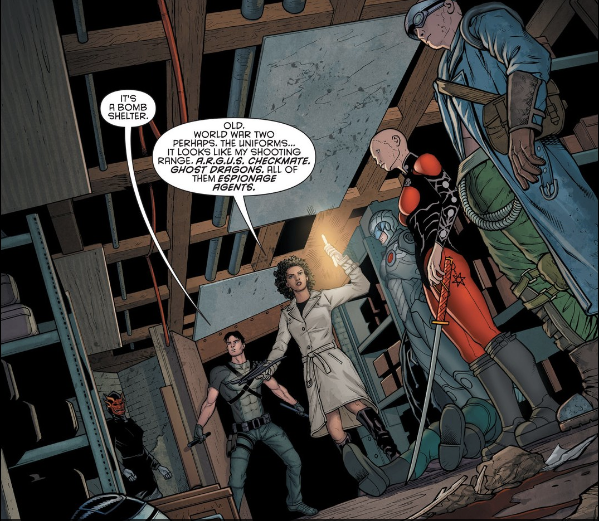 Dick and Helena get ever closer to their mark.

Issue Two was not quite the unbelievably fun comic that One managed to be, but it was a very solid follow-up and, I admit, has me eager for more. The characters’ goals are becoming clearer, and their interactions with each other are once more well-written, and an improvement from the climactic disaster than was the end of the Nightwing series. My main concern now is that Grayson doesn’t get fully absorbed into DC’s Future’s End crossover event that will rob it of its own forward momentum in order to support the bigger players. So far, this superhero spy series can stand on its own, and if there’s something that a secret agent needs, its independent agency.

Grayson is written by Tim Seeley, with art by Mikel Janin.