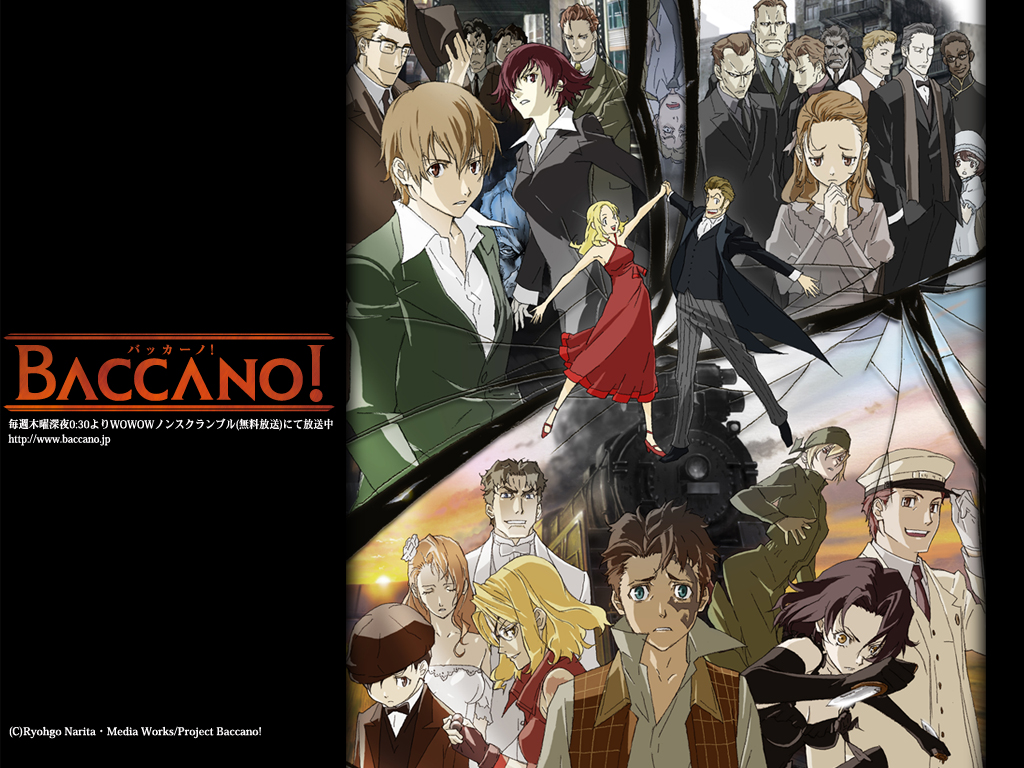 Originally a light novel series, Baccano! is well known for the anime adaptation of it, which was aired in 2007.  The story has multiple parts, the first part beginning in 1711 with a group of people who summon a demon in order to become immortal.  The rest of the story takes place in the early 1930’s.  The interesting thing about the anime adaptation is that it, while it does not tell the whole story, (it leaves out the events after 1932) it tells the story in a non-linear fashion, allowing for a lot more tension as the story bounces from a gang war and kidnapping to a battle for the elixir of immortality to the events that take place on the train called the Flying Pussyfoot.

This story is very well put together and the non-linear fashion that it is organized in makes it hard to stop watching.  The story builds a tension and holds it for the entire anime.  The only part it doesn’t is the boring introductory first episode.  However, if you muscle through this episode, you will find a wonderful and exciting adventure awaiting you.  Brutal action and violence, intrigue, romance, and everything else in between.

The story can be a bit hard to follow due to how it’s presented, though I never found that to be a problem as I watched it.  All of the characters are actually well made, having defining characteristics and they stick to those mannerisms for the entire show.  In the writing world, it’s known as establishing manners for a character. (Warning, spoiler alert ahead, just skip to the next paragraph if you don’t want to read it) A wonderful example is Ladd Russo, whose entire character is his love of killing things.  He kills people and that’s what he loves to do.  He doesn’t care about anything else.  But then when his girlfriend, Lua Klein, who he has promised to kill someday, is in danger, falling off a train, he abandons all else and jumps after her, creating a very powerful moment.

There are plenty of great moments for the characters like this scattered throughout the series.  It makes things interesting as you try to figure out what will happen and then, much like Code Geass, or perhaps The Dark Knight, when it does happen, you say, “Wow, that was awesome.”  I left this show feeling incredibly satisfied with not only the ending, but how I arrived at the ending.  I felt as though this story could easily be turned into a movie and make quite a bit of money at the box office.  That being said, just get through the first episode, and I’m sure you will enjoy it just as much as I did.