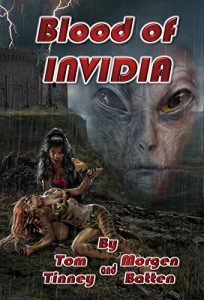 10,000 years ago an alien race known as Invidians waged war and conquered worlds across the galaxy. But their ultimate goal was eternal life.

And The Invidians did find eternal life, but vanished shortly after. That is, until lethal aliens are captured on social media fighting in the streets of New York. Blood of Invidia follows three friends who find themselves involved with a mysterious stranger. They learn that humanity may no longer be at the top of the food chain as the Invidians appear to have reappeared with a vengeance.

Blood of Invidia was written by Tom Tinney and his son Morgen Batten, but what makes their collaboration unique is they have never met. Circumstances kept Tom and Morgen from ever meeting in 32 years and when the idea for the book came about, they had to use other methods to communicate ideas. With Morgen in Australia and Tom in Wisconsin they used Dropbox, Skype, and other technology to exchange thoughts and ideas often days apart due to time differences.

Through all those hardships, however, Blood of Invidia was created. So: pre-order your copy today. 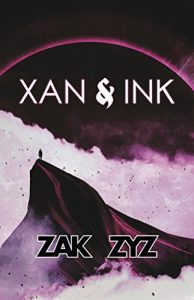 Two disgraced brothers, one a fanatical priest the other an escaped slave, venture into the mysterious and dangerous jungle known as Kalparcimex.

Written by Zak Zyz, Xan and Ink follows the brothers who, on a quest for redemption, enlist legendary ranger Xan for help, but are turned down. They are then forced to accept help from Ink, a sorceress who is cursed and “stains” anything she touches. They soon become caught between these two powerful figures as they try to escape from the Kalparcimex.

Buy your copy of Xan and Ink today.

John Stith is an award-winning sci-fi novelist and ReAnimus Press is celebrating his works by re-releasing all nine of his novels.

The most recent release is Reunion on Neverend, first published in April of 1995 and put back into circulation the first of October. The story follows one man’s journey home, where he becomes entangled with an ancient alien mystery that could bring salvation or destruction to anyone who becomes involved.

This is the third of Stith’s novels to be republished, the next is Redshift Redezvous to be released on the 16th of November. His work has received high praise from publications such as the New York Review and the Chicago Tribune.

Check out the complete works of John Stith here. 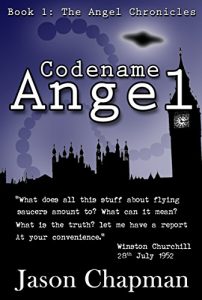 In 1950’s England, in the midst of the Cold War, Cambridge physicist Professor Ralph Frederick is given an unusual task by Prime Minister Winston Churchill.

Frederick is assigned with a committee called Codename Angel: a group tasked with investigating UFO sightings across the United Kingdom. Frederick is a diehard skeptic, whose world is rocked when he comes into contact with actual aliens.

Written by Jason Chapman, Codename Angel blends the tension of the Cold War with the paranoia people had over flying saucers. The book is partially based on real-life flying saucer sightings and a memo written by Churchill in 1952. Codename Angel is the first in a series, the third entry The Angel Prophecy is set to be released the 17th of October.

Pick up a copy of Codename Angel and start the series today.