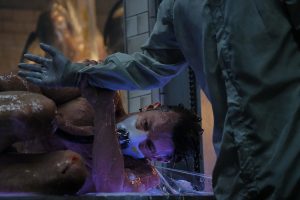 Time To Wake Up To Altered Carbon

Full disclosure: I’ve only seen the first episode of Altered Carbon. I’ve already begun the second, but in the interest of being open, that’s the truth. I am a new player to this game. Awakened to a more technologically advanced world.

Which, if you have not gotten my reference by now, is a rather fitting state to be regarding Altered Carbon. Now, let me say, I am not—not even a little—an easy movie and television show viewer to please. I can find plenty passable, but to truly excite me you need to do some fantastic stuff or pander to my specific tastes.

And, while Altered Carbon does include a violent battle set to lively jazz and deals with the kind of cyberpunk transhumanism I will force randomly into conversations even if I must do a three-sixty tangent, I think it’s still a good show beyond my biases.

I mean, I am not infallible. Edgar Allan Poe as an A.I. with a shotgun makes the critical part of my brain shut down and just eat its popcorn, but, from what I gleaned past my satisfaction, there seems to be a real show here. Something worthy of being on air, with all the other excellent stuff we are getting these days. 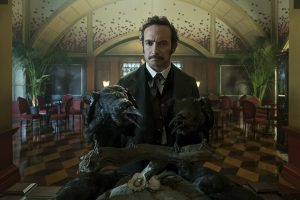 Altered Carbon, at least in the first episode, suffers from a serious case of technobabble frontloading and exposition. To the show’s credit, by the end I was clear on the meaning and significance on all but two of the myriad of terms (even by episode two I’m not totally clear on one thing), but the show hits hard early with a shotgun of words you have no hope of getting at first. They then also clean up that problem when necessary with an old shortcut: explaining stuff through info-dump dialogue. Mind you, at most points, the characters are not repeating data that the receiver should already know—but there are a few times where you can see it’s only for the audience.

But, again, there’s a lot to love. Every time something is exposition, it’s fascinating exposition. Throwaway lines hint at a world that would keep philosophy majors talking for hours and technology nuts frothing at the mouth.

And, the show also gets right the one thing you must get right: characters. Sure, the main man is an anti-hero superhero, one leaning a bit too hard on the “Marty Stu” side of things, but he’s fun despite that—and, surprisingly, more a Sherlock-like character than you’d initially expect. He solves his problems with wit and muscles together—not just a punch here and a punch there.

As to the supporting cast, there’s a definite level of trope-ness in the first episode, but the actors deliver it so well they get depth anyway. In fact, too much energy is going into some of them for me to think they will remain so simplistic by the third episode.

And I am, for sure, watching that third episode.

Like I said, this show’s trappings are my weakness, and the second episode promises a closer look at A.I.s, which is just another thing for me to gush about.

If you even remotely like cyberpunk settings, if lasers and action, and heavy, well-explored sci-fi concepts make you excited (and you’re also over 18, it’s an MA show for a reason) then give Altered Carbon a chance. Netflix continues to put out awesome stuff, and this will be something people will be talking and thinking about for a long time.

Altered Carbon is also a novel. Click the above picture for the link.