The final trailer is here. Tickets are available for presale online and this whole “waiting for the new Star Wars movie” is soon to become the “holy crap did you see The Force Awakens?!” The last trailer was released during Monday Night Football and has already blown up on YouTube with over 12 million hits. Check it out for yourself.

Whoa. On Twitter, director J.J. Abrams revealed his excitement for the footage to be out as well.

We get a better peak at Daisy Ridley’s Rey and John Boyega’s Finn. The film takes place thirty years after the events of Return of the Jedi and Rey and Finn, as well as popular opinion, has concluded that Jedi and the Dark Side are just an old myth. Then they talk to Han Solo, who was there, and confirms that all of it was very, very real.

There’s also the guy who is picking up where Vader left off, and that’s Adam Driver’s character Kylo Ren. We see Ren tussling with Finn in the forest (maybe we’ll get more answers on the possibly-not-practical new lightsaber) and Oscar Isaac’s Poe Dameron.

It’s always a joy seeing more Han and Chewie, too. There was even a Han and Leia hug! So sweet! Much nostalgia!

Here’s the biggest question, though. Where the f*** is Luke Skywalker?! I’m assuming it’s his hand reaching out for R2-D2 about halfway through the trailer, but we don’t see his face. Also highly controversial, here is the recently released poster for the film. 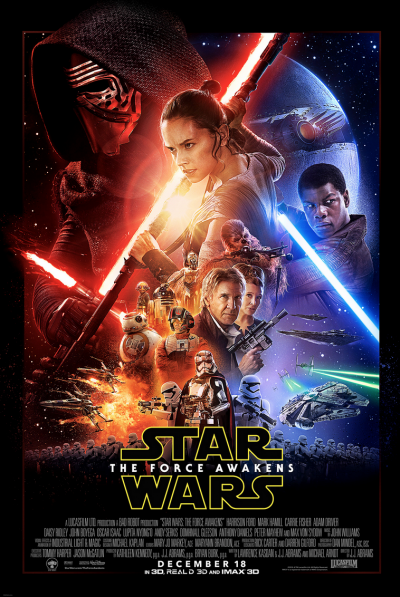 Where is Mark Hamill?! Of course the internet was outraged, which leads to wild speculation. Did he not go on to rebuild the Jedi Order in this universe? Did he fall to the Dark Side?

Hopefully we get answers when Star Wars: The Force Awakens on December 18th.

If you enjoyed Carly’s awakening, you can find the rest of her work right HERE on Sci-Fi Bloggers. You can also follow her on Twitter @MrsCarlyRodgers.