Near the end of last year the announcement trailer for the upcoming adaptation of J.K. Rowling’s Fantastic Beasts and Where to Find Them debuted and we’re taking a look at the wonderment of it all. Check it out.

Yes, finally some magic back in the theater! Did you get the chills hearing the familiar lumus maxima once more? Or maybe it was when those familiar notes rang in the background? Anyways, the teaser is full of suspense as we hear the quivering voice of Porpentina Goldstein, played by Katherine Waterston, appearing in front of the Magical Congress of the United States of America warning them that someone has let a few mystical creatures onto the crowded streets of 1920s New York City. How very daunting. 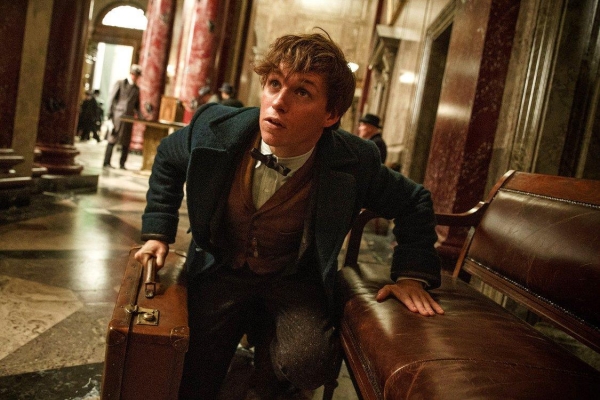 It must be the eccentric Newt Scamander played by Academy Award winning actor Eddie Redmayne. It appears that Newt and his suitcase bursting with creatures are causing more than just a stir in the city. The relationships between the magical community and muggles is more than strained and now the possibility of terrible and free beasts has both groups charging for one another. Newt must collect his beasts and help make things right for all.

The movie will premiere on November 18th 2016 and is directed by Harry Potter aficionado David Yates. The screenplay is J.K. Rowling’s and the film boasts other big names like Ezra Miller, Colin Farrell and Ron Perlman. It’s highly likely that the film will be a box office smash as Harry Potter fans will flock to the cinema to get their taste of nostalgia. However, it is an interesting direction to take for Warner Bros. as they’ve already announced the series as a trilogy. Yes, people want more Harry Potter, but they definitely don’t want any Hollywood studios touching the originals or altering anything about the novels but this extension of the lore, rather than a retelling, may inspire other series to do the same. If it’s successful, that is.

If you enjoyed finding Carly, you can find the rest of her work right HERE on Sci-Fi Bloggers. You can also follow her on Twitter @MrsCarlyRodgers.