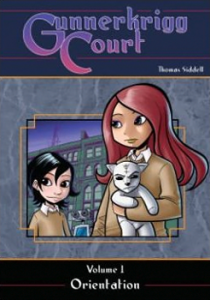 The internet has made for some rather crude developments over the last couple of years. While simultaneously being a way for people to connect, it also gives the rather unpleasant and scary people safe havens in forums where they talk about safe words and what cheeses they like the most to be poured on them during sexual intercourse. In its better light, the internet has also provided a home for budding artists whether they be musicians, writers, and even comic book creators. One such  person is Tom Siddell writer and artists behind the award winning web comic Gunnerkrigg Court. 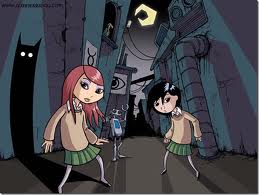 The webcomic was first released in 2005, so as far as these comics go, it was part of that beginning set where the internet was beginning its boom in social awareness. Siddell writes and draws the series, which updates three days out of the week with  a new page. The story is a fairly simple concept. The series starts as Antimony Carver, a young girl, begins her new life at the boarding school Gunnerkrigg Court following the death of her mother. However unlike any other boarding school, the Court has more mysteries and secrets than the staff care to share with their students, or that they even know about themselves.

Advertised as school for gifted children, it teaches these kids a combination of etheric principles and extremely modern technology. As if it were Harry Potter meets some type of futuristic society. Many characters are drawn from myth and Siddell seamlessly combines fantasy, science fiction, and mythology into his stories and having it seem natural as opposed to out of place. Siddell leaves the reader so much to imagine about this mysterious school, that it would appear as if there are few things he cannot introduce that would seem out of place. Living shadows, sentient robots,minotaurs, satellites, ghosts, living dolls, dragon slayers. There are great many creatures that are introduced and kept around and develop as stronger characters. Siddell is able to do what a lot of writers forget to, and that is work with what it is he has and characters he has created.  He doesn’t waste space by introducing someone and then forgetting about them altogether. Which is especially prominent in the student characters besides Antimony and her best friend Kat Donlan. 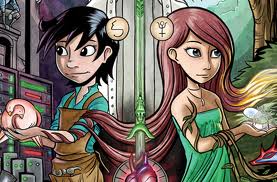 The duo, Kat and Annie, balance one another out, where Annie deals with the etheric, more magical properties of the Court, while Kat deals with the technologies. This is a prominent theme throughout the series, the political divide between the Court, a symbol of man and advance technology and the wood that is next to it, housing the creatures of myth and legend. The two are not the best of friends, and have a had an ongoing mistrust and moral differences from one another that serve as some of the major conflicts in the series.

Mostly Siddell writes stories that can stand alone. From the first Chapter no one would necessarily be able to tell that the series would span for another six years. However, another thing Siddell does impeccably is having these episodic chapters but still managing to have character development that can be seen. Part of the difficulty in having any series focused on children in a young age and growing up is learning to show them growing as people and being less a confused kid and more of a independent person.

What helps to demonstrate the development is the growth the reader can see in Siddell’s artwork and the stylization he incorporates as he becomes more invested in the webcomic. The first few chapters really appear very cartoon like with big heads,small bodies, more solid colors and less background detail. However this changes throughout the course  and Siddell’s colors begin to blend, there is more detail in the images he creates. Like the ideas of the etheric and technological coming together, you can see him progress to that through his art. 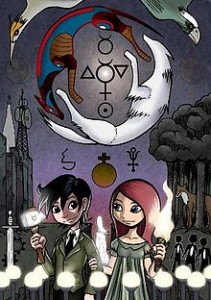