It wasn’t a question of if I was going to see Ridley Scott’s new film The Martian, but when. Was the film adaptation of Andy Weir’s novel worth finding my place in a packed theater that would be kept freezing cold despite it being the beginning of October in the Midwest? Maybe I could give it a few days and see a matinee and let the feedback of social media influence my expectations.

I made a compromise. I went on the Saturday of opening weekend during the noon show. The theater was far from packed and I sat comfortably between two bros. The film started with a scene between the crew of the Ares III mission. They took samples of the soil, clacked loudly on keyboards and teased one another like friends on a playground despite being almost 40 million miles away from the nearest school on Earth. It’s a short bit of banter, but we instantly feel the closeness of the crew and that’s why the following minutes punch us in the gut. Crew member Mark Watney (Matt Damon) is following behind as they walk to the Mars Ascent Vehicle to make an emergency departure from the planet when he is struck by a rogue satellite and flung into the storm. Thought to be dead, the crew leaves Mars under the instruction of a devastated Commander Lewis (Jessica Chastain).

When Watney wakes up to find himself stranded on a planet and left for certain dead the audience feels anything but excitement. I mean, yeah he’s alive, but for what? To spend his remaining days shrouded in loneliness? Terrified that everything will eventually and inevitably turn against him? Luckily, Mark is a man unlike any other. He keeps an upbeat sense of optimism that should be hard to believe, but Damon’s performance allows viewers to feel okay. The man deserted on a desolate planet is using quips to make the audience feel okay and not completely entranced by isolation. Watney dumbs down his immense knowledge of botany just enough to explain to us how he’s going to grow a field of potatoes on a planet where nothing grows. Even as he explains how this is all going to work, you can’t help shake the feeling that it’s all about to go wrong. 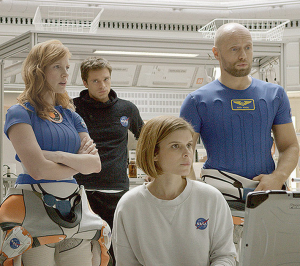 There are moments of laughter, terror and intensity that more than encapsulate you. It’s bringing you into that world, Mars, and it makes you feel like you’re a part of the complicated plot. I sat in my seat and followed along with NASA jargon and laughed when Donald Glover’s character childishly explained his idea to rescue Watney with a stapler and a pen, even though it’s the exact explanation I needed. I felt that sense of fear and wonder like those people in Times Square and around the world as they watched the live coverage of rescue attempts. It’s that kind of film that you would, and should, happily sit in a crowded theater for.

If you enjoyed Carly’s mission, you can find the rest of her work right HERE on Sci-Fi Bloggers. You can also follow her on Twitter @MrsCarlyRodgers.