This week the long-awaited Lego Dimensions game dropped for PS3 and 4, Xbox 360 and One as well as the Wii U. The ages recommended is 7-14, which is ridiculous because Lego games are atrociously fun for all ages. Dimensions in particular encompasses so many popular characters that there’s sure to be something for everyone. It’s a mash up of all the worlds you love voiced by the real actors who played them.

The $100 price tag is hefty, but the disc isn’t the only thing you’re getting. In the starter pack there are also 269 pieces to assemble before you get your game on. There’s a Toy Pad which will serve as the connection between your real world decisions and the game itself. Sitting atop will be the Gateway. It resembles the portals you will comes across. The pack also includes your first three heroes. You’ll get Wildstyle from The Lego Movie, Gandalf and Batman from not The Lego Movie. And what’s Batman without his Batmobile?! Yeah, you’ll get to put that together too. 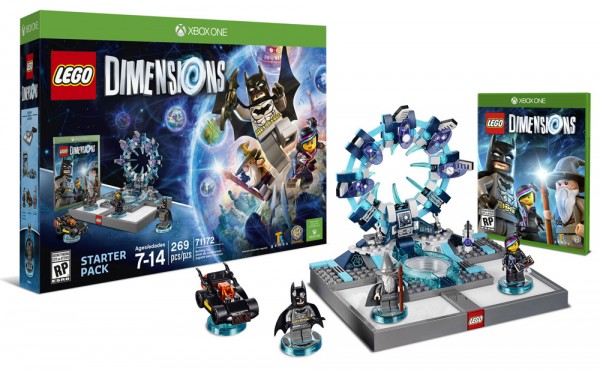 As time goes on there will be other starter packs available so you can bring some of your favorite worlds together. There are three varieties of packs to choose from with Level Packs running for about $30 and containing a character and two featured items as well as a new level to run amok. Currently available are Marty McFly and Back to the Future, Chell and the Portal 2 pack and Homer Simpson with The Simpsons edition. Coming later this year are Doctor Who, Ghostbusters and Midway Arcade. The Team Packs offer two characters with one item each for about $25. Out now is Jurassic World’s Owen Grady and his beloved Velociraptor, Blue, and the mystery-cracking team of Scooby Doo and Shaggy. The next available team will be out in November from Lego Ninjago followed by the DC Comics crew of The Joker and Harley hitting shelves in January. The Fun Packs are the least expensive additive offering a simple character and a franchise item. These will cost you around $15. Included are characters from The Lord of the Rings, The Wizard of Oz, Lego Chima, The Lego Movie, Lego Ninjago, DC Comics, The Simpsons, Back to the Future, Doctor Who and Ghostbusters.

Together these characters will work together to defeat the evil Lord Vortech as he tries to reign over the entire multiverse.

So is the hefty price tag of the starter pack worth it? Are the add-ons making your pupils turn to dollar signs?

If you enjoyed Carly’s pupils, you can find the rest of her work right HERE on Sci-Fi Bloggers. You can also follow her on Twitter @MrsCarlyRodgers.