NOTE: Spoilers for The Legend of Korra lie ahead.

Okay, it’s been awhile since The Legend of Korra wrapped up. I’m sure that, if you watched it at all, you’ve probably moved on. New TV shows, new books, movies; the world keeps turning. But this show, finished though it is, has stuck with me, and I think it’s worth revisiting. Before I go on, I’ll just say it: The Legend of Korra, Book 4, made me cry. A cartoon, people. A cartoon made me cry. I can’t think of the last time a cartoon did that (well, I can; it was Avatar: The Last Airbender, but that’s not the point). 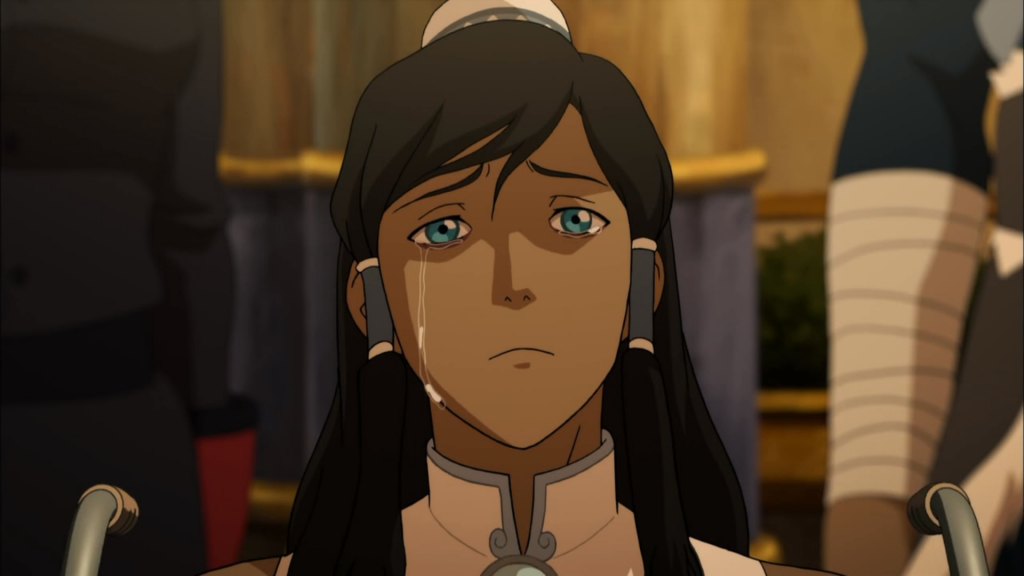 Here’s why it did: Korra is a real person with real pain. Her struggles are so powerful, so painful, and when she hurt, it hurt me, too. As a mental health worker, I was sitting bolt upright in my seat (and yes, crying) as I watched through each episode.

It’s no secret, even to someone who isn’t trained in the mental health field, that Korra develops post-traumatic stress disorder after her encounter with Zaheer. And, as the title of Book 4 suggests, this throws her life out of balance. She is broken physically, mentally, emotionally, and spiritually.

The thing I was struck by throughout the season was that the creators really did their homework. Think about that for a moment. Imagine the type of people who grow up and decide to make cartoons for a living. Imagine what those guys must have been like as kids. They probably hated homework! And yet, the reason this season hits home the way it does, is because they really get it right.

Korra experiences intense flashbacks. She spends so much of her time caught in the fight-or-flight response. She actively avoids things that would remind her of her trauma. Ultimately, she blames herself for what happened. These are all symptoms of PTSD. So many shows, movies, books, and cartoons avoid mental illness as a topic for discussion like the plague. To see a cartoon, technically a “children’s show,” wrestling with such material, amazes me. 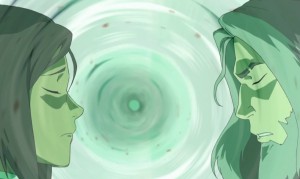 When Korra’s life becomes unbalanced, she begins seeing visions of herself in the Avatar State, visions of herself as she once was. And these visions attack her. She becomes afraid of being the person who was made powerless at the hands of Zaheer. The Avatar is supposed to bring balance to the world, but she’s put in a position of total powerlessness, and in the process loses the balance within herself. It’s not until she can face her attacker, make meaning out of her experiences, learn to talk and think about them without re-traumatizing herself, and accept that these things happened, that she can once again find balance within herself. It’s only then that she can bring balance to the world.

In real life, we don’t get an actual physical manifestation of ourselves to fight with. There’s no Spirit World meditation that allows us to know, without a doubt, that we’re healed. It’s a process, and the show really conveys that well.

And yet, real life isn’t like cartoons. As the Avatar, Korra’s inner reality takes physical form. Her meditation is blocked by flashbacks of Avatar-level intensity. She is unable to go into the Avatar State at all. Finally, when she faces Zaheer, she goes into the Spirit World and, eventually, becomes whole again.

Here’s the bottom line: her Avatar nature is the perfect vehicle to drive the real-life struggles home. The fantastical is used to touch something so painful, something so real. I want to see more of that, not just in cartoons, but in our “adult” science fiction and fantasy as well.

The other-wordly, futuristic, and occasionally fantastical aspects of science fiction and fantasy are the perfect vehicles to explore real-life pain. They can help us think about our own struggles, and insofar as we see ourselves in the characters, we can be inspired to grow, to change, and to find balance.

The Legend of Korra, Book 4. It’s amazing. It’s inspiring.
It’s…a cartoon. But for kids? Maybe not.