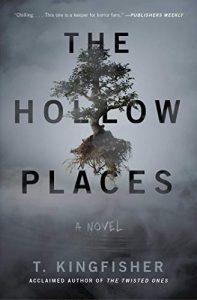 The Hollow Places Sucks You Into Its Twisted Tale Easily

I’d not read anything by T. Kingfisher before this novel, but given the grace of the prose, The Hollow Places will not be the last. She’s shown her sureness within both this subgenre and in the art of simply telling a good story.

And, for those hearing about this book for the first time, allow me to tempt you with this incredible hook: In a strange museum to the odd and the weird, something much stranger comes through a hole in the wall to another dimension. And the stuff on the other end is no Narnia, but something quiet and deadly.

And now, with that clarified, the first compliment I’d like to pay is that The Hollow Places is easily digestible. With a premise like that, in a genre like cosmic horror, you might expect hard-to-visualize things. But, with some exceptions, the sureness and clarity of delivery with most of the horror is refreshing. If you’ve been turned off the genre before, then look no further for an entry point.

But no good horror story is made of only scares—and it’s here we jump to the main character. First off, I cannot come up with another horror novel that centers on a middle-aged woman—especially not a recent divorcee. That alone makes for a unique flavor to the genre. But it goes further. The supporting lead, Simon, and our main have an awesome, realistic friendship. The sheer lack of romance and focus on both the realities of poverty and the human tendency to adapt and make a home anywhere they can grounds the tale in honesty. Horror isn’t known for happiness, nostalgia, and kindness being given lots of space, but it’s here. And it helps make it scarier. When the horror comes, its invasive nature is even more concerning and disturbing.

But the point where the book got me, where it tore in its teeth, was the sheer unwillingness to play by rules. The tone doesn’t follow the usual trajectory. Even if something’s predictable, the overarching motions can leave any reader off-balance. When I mentioned a portal to another world, you probably guessed at a plot by that premise alone. The average reader would assume that the only mystery left is the nature of the world. That assumption is wrong. The Hollow Places allows its characters to make smart choices, and the plot doesn’t need to undermine them to keep things going.

The Freeform Narrative Keeps Everything Uneasy

The issues with the book, paradoxically, though, are there are still things here that are too predictable. Some things the book telegraphs obnoxiously hard. Plot points are called attention to repeatedly. While making a reader wait isn’t a bad thing for suspense, it did drag these aspects in all the wrong ways.

The other issue is more subjective. The Hollow Places isn’t as wild as I would’ve liked within cosmic horror. The book has about three moments of impactful, mind-cracking terror, and a smattering where it gets the right flavor of unmooring and existential. For a more-than-300-page book, however, you’d expect more. More and more often.

And this brings me to my last observation. Though The Hollow Places seems like it’s for entrenched horror fans, I’d argue it’s perfect for the newbie, the exploring. The breezy and gentle pace, the focus on more normal aspects of life, and the slower doled-out terror and gore make it a more casual read. It’s not going to obliterate the fearful as The Magnus Archives might. The Hollow Places is a lot of things: elegant, intricate, homey, but it’s not aggressive. You can read it at night, alone, and perhaps still get sleep. Though I cannot promise you won’t have strange, willow-filled dreams.