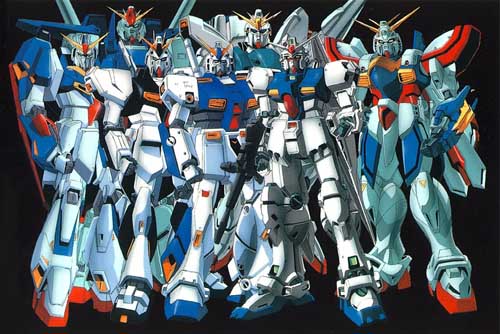 Gundams. Giant robots. War. People who have no business piloting million-dollar war machines. War. The Gundam franchise asks simple questions: what would war on an interplanetary scale look like? What happens when the giant robots replace the common soldier as instruments of destruction? Just where is the point where ultra-violence becomes overkill?

The answer to all these questions is buried deep in a time-tested formula of space battles, character development, rivalries and the one truth that soldiers must ignore to win the day: the enemy is no different than us.

First staple of every Gundam series: the pilot.

THE PILOT: These robots aren’t given to just anyone. They require years of training to be used to their full potential. And yet, for such mighty machines, they do seem to fall into incapable hands. A lot. The protagonist is often a mechanic or designer; someone who understands the Gundam on a purely technical level. His lack of training fulfills a plot device: the pilot grows up with the audience as the series progresses. War changes people, especially those who have no right to be there or are thrust in the middle.

RIVALRIES: Massive battles mean massive stakes. The protagonist meets a kindred spirit only to watch her die at the hands of an enemy soldier. Then the protagonist kills someone close to the enemy soldier. A rivalry forms. The pilots’ battles take center stage. Verily, it seems the whole series revolves around them.

FACES: Soldiers must inherently believe the enemy is some evil mastermind in order to fight them. They cannot accept a simple truth: their foes have families, names, and faces. They love, they grieve, they suffer. It’s hard to kill someone who could have lived down the street. Somewhere along the line the protagonist realizes this, and is saddled with the burden that he is killing people who, in another life, could have been neighbors. In response, a non-lethal stance in battle is developed, disabling enemy robots without killing the pilots. This extends into the belief of a “bright future for all.”

WAR: It’s a messy business. It gets even messier when the soldier is replaced with a giant machine capable of laying waste to whole cities. Yet the mechanical element is paired with a human element: a humble engineer/mechanic, green as the grass underfoot, growing with the audience. His transformation from civilian to soldier, from child to man, is at the heart of every Gundam series. It shows war through the uninitiated’s eyes, as well as serving an underlining message. At the end of the day, when the last enemy vanishes into a cloud of shrapnel, we’re all the same. And while I’m not that naïve to believe that embracing that ideal will eliminate all future wars, I do believe that it would be a good first step.

All this depth from a Japanese cartoon. Who would have thought?

If you enjoyed Michael’s flight, you can find the rest of his work right HERE on Sci-Fi Bloggers. You may also check out his personal blog over HERE.