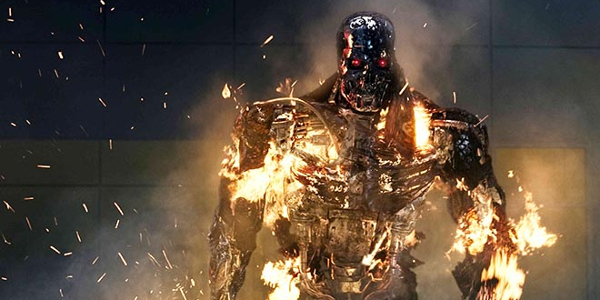 The Terminator franchise has been hugely successful. This is true to such an extent that it has spawned video games, an online slot at Royal Vegas amid a host of other branded merchandise. This is unsurprising considering that there are so many iconic moments in the Terminator series. Here are four of our favourite in the first two James Cameron-directed films…

The phrase “I’ll be back” has become Arnold Schwarzenegger’s catchphrase. This is true to such an extent that he has used it – in some form – in every one of his films since his robotic alter-ego first uttered the immortal line in The Terminator.

Watch the scene in the police station now and it seems somewhat understated. With Sarah Connor being held for questioning at the police station, the Terminator asks the cop at the front desk if he can see her. After the cop brushes him off, Arnie says ‘I’ll be back” and leaves. True to his word, the Teminator ram raids the station and squashes a number of cops in his pursuit of his intended victim.

While some consider the visual effects in the later films to be the only thing that improves on the first two, the blue lightning flashes, smoke and wind that appear as the two characters arrive in 1984 from the future are no less thrilling.

The Terminator is first to travel back and here we see the emotionless cyborg demand someone’s clothes before tearing the poor guy’s heart out when he refuses. Next, we see Kyle Reese (Michael Biehn), clearly wounded and in pain from the journey. Nobody said travelling to the past in order to father your best friend and save his mother would be easy! 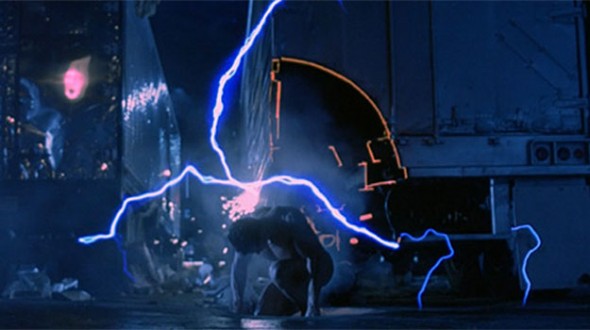 John Connor calls his foster parents, Todd and Janelle, to check whether the T-1000 has got to them. Covering the mouthpiece, John then tells the T-800 (Arnie) something is wrong as Janelle seems unusually nice.

The T-800 then asks John the name of his dog (it’s Max), before mimicing John’s voice to ask Janelle what’s wrong with Wolfie. When she responds by saying that “Wolfie is fine, honey”, this tells Arnie that Janelle is the T-1000 and John’s foster parents are dead. There’s something really cool about the two terminators talking to each other in each other’s voices.

Part of the same scene as the dog barking moment described above. Here, we see Todd talking in the background while the T-1000 (disguised as Janelle) talks on the phone. We then hear a metallic ripping sound before the camera slowly pulls back to reveal the T-1000’s extended, razor-sharp arm protruding through the mouth and out of the head of John Connor’s now dead foster dad. This moment is of the most affecting and gruesome in the entire franchise.