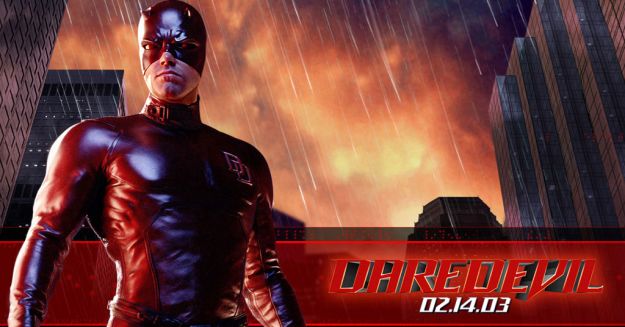 Written for the Screen & Directed by Mark Steven Johnson.

Upon release, Daredevil was considered among the lower tier of film adaptations for Marvel comic book characters. Its stock hasn’t risen all that much since, even amidst the exponential rate in which superhero movies are released these days. Could this be because audiences were treated to a watered down version of the movie, trimmed by a half-hour to move faster and fit into more screenings per day at your local multiplex? Is the filmmaker’s original vision worth your time?

Well, that all depends on how you feel about the movie you saw in the theater and your general interest in the title character. If you hated it to begin with, the extra half-hour of screen time won’t change your mind, but it does make for a more coherent viewing experience that improves on the theatrical release.

Ben Affleck stars as Matt Murdock, a blind attorney who moonlights as leather-clad vigilante Daredevil. Oddly framed as one long flashback leading up to the finale(s), the film follows his childhood (while I find his performance is unfairly maligned overall, Ben Affleck’s somnambulant droning as narrator early on gives the one Harrison Ford begrudgingly did for Blade Runner a run for its money) all the way through to his crime-fighting days, his romantic encounter with martial arts master heiress Elektra (Jennifer Garner), and an eventual showdown with the Kingpin of crime, played by Michael Clarke Duncan.

Thankfully, the incomprehensive chain of events that marred the much shorter theatrical release is smoothed out in the Director’s Cut. Besides the few remaining gaps of logic that can be forgiven, everything makes a lot more sense. A subplot featuring a bizarrely cast Coolio as a man on trial for murdering a prostitute ties everything together towards the end in a satisfactory manner and restores screen time to Jon Favreau and Joe Pantaliano, as Matt’s colleague Foggy and the reporter Ben Urich, respectively.

Despite the improved narrative structure, however, this version of Daredevil still doesn’t atone for what was mainly wrong with the film in the first place; its tonal inconsistency. It never quite knows where it wants to settle in the pantheon of comic book films; dark and down to earth or hyper-realistic and fanciful. The story is grounded in a real-world setting with a hero whose superpower involves a so-called “radar-like sense,” but our hero is doing CGI-enhanced stunts that would feel more at home in a Spider-Man film. One minute we’re watching a flirtatious fight scene between Jennifer Garner and Ben Affleck on a playground, the next Michael Clarke Duncan is crushing the throat of one of his bodyguards for almost no reason.

This is exacerbated when Bullseye (Colin Farrell) walks into the picture and camps things up to such a degree that the movie isn’t the same anymore. Daredevil has a hard time harmonizing something like Farrell’s campy performance (which, to be honest, is actually one of my favorite things about the movie) with oh-so-serious scenes with a choir chant early on and later with Jennifer Garner training to avenge her father’s death while that Evanescence song, whose popularity on the radio overshadowed the movie itself in the winter of 2003, plays on the soundtrack.

Despite its bad reputation, Daredevil is not so awful. It’s no masterpiece, either, and I prefer the other two movies to feature Marvel characters that came out in 2003, The Hulk and X2, to this one, but there’s some positive qualities to witness here.  It’s still hard to say if audiences would have responded more favorably to the Director’s Cut if it had been what was shown in the theater, but it’s a more accomplished movie. If you’re going to see Daredevil for the first time, the Director’s Cut is the way to go.