More articles than this will be released later today, so stay tuned!

Coming out of the UK and landing on AMC is the new series, Humans. The show allows us to look into a possible future of the blurred relationships between humans and machines.

Based on the Swedish series, Real Humans, the show focuses on different groups of people including the Hawkins family. Husband/Dad Joe decides to surprise his wife (shocker, not a great idea) with a drop dead gorgeous android named Anita (played by Gemma Chan) that can help with the housework. The kids and Joe take an immediate liking to her, but wife Laura is not as comfortable with the idea of a machine around her children. 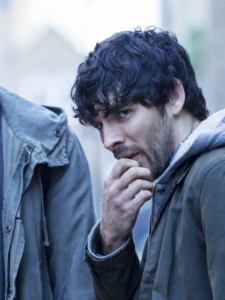 As an audience, we learn quite quickly that Anita may not be like every other android, or Synth as their referred to. We see her in a flashback out in the woods with a group of androids and a human. She seems to be emotionally connected to the lone human, Leo, played by Merlin’s Colin Morgan.

Other people also seem to be bonding with the Synths. Dr. George Millican, the great William Hurt, an originator of these androids has formed a fatherly bond with Odi, an older model in desperate need of an upgrade.

So of course, it seems that some Synths have gained consciousness and become aware. Why? Not sure, but the eight-episode series should answer at least some of our questions. Humans premiered on June 14th and may continue depending on its success. Since also airing on Channel 4 in the UK, it has become their highest rated drama since 1992 and currently holds an 86% Fresh rating on Rotten Tomatoes.

It’s not exactly a new and original plot, but it’s at least worth checking out to see how the stories tie together. You can watch the series over on AMC’s site or on Sundays at 9/8c.

If you enjoyed Carly’s real article, you can find the rest of her work right HERE on Sci-Fi Bloggers. You can also follow her on Twitter @MrsCarlyRodgers.