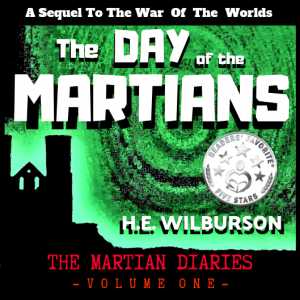 The Day of The Martians: Worthy Sequel

Full disclosure before I review The Day of the Martians: I have not read The War of the Worlds. My biggest familiarity with the property is the Stephen Spielberg movie starring Tom Cruise. And I enjoyed that movie a lot—but The Day of the Martians is a loving continuation of the original novel and radio play.

Which is appropriate, because this too is a radio play. And, though this is a well-made radio play, the biggest barrier to entry is that aspect and the pacing. The Day of the Martians starts very sluggishly. Sure, the well-done narration, voice acting, sound effects, and general production allows you into the story easily, but, if you listen to it in one sitting as I did, it drags.

But this might be intentional. The slow build does do a few things for the play that a quick pace wouldn’t. It establishes the characters in relatively normal circumstances, and it builds a palpable mood. War of the Worlds isn’t usually called a horror movie/book, but taken objectively, it’s got some real cosmic horror aspects. And I’m pleased to note that The Day of the Martians makes this very pronounced.

Like, this play gets dark. The existential nightmare of just how over-powered Martian technology is compared to the society of the era is genuinely unnerving, and the story manages some real stakes when human soldiers try to deal with them. My favorite aspect is when a scientist character truly describes how screwed the earth is because of the Martian invasion. 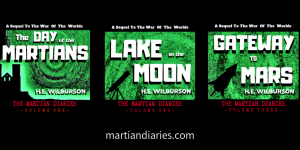 The Day of The Martians Hits Surprisingly Hard

And then there are the more surreal moments. Stuff that maybe came up in the original book, but as far as I know are wild deviations. I’m talking an odd hallucination or perhaps a literal angel talking to the main character. Though, despite what you’d think, far from being overly suspension-of-disbelief jarring, these moments add a lot to the story. It makes events feel more personal to the main character, more spiritual in its themes—and that, at least, I’m led to believe is accurate to the book.

On the flip side, the broader plot side, there’s the added science fiction concepts. The creators really did a good job of including new things to the story that feel like natural continuations of the established Martian technology. New massive war machines and a novel doomsday weapon are still described as you’d expect someone from the late 1800s to perceive them. It’s just good worldbuilding.

Basically, if you’re willing to wade through some opening slog, there’s a lot to like here. It’s engaging, emotional, and feels like its ideas came from the man himself. The Day of the Martians is a nostalgic trip back to bygone days spent reading science fiction classics, and that’s quite a compliment indeed.