So they missed with Ascension and are onto something with 12 Monkeys, but does Syfy’s adaptation of The Expanse look any good?

Just recently the network uploaded the trailer to its YouTube channel to preview the series starring Thomas Jane and Steven Strait. You can take a look right here. 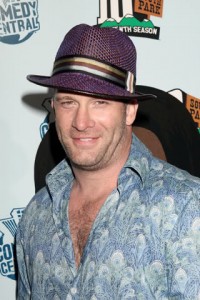 The teaser shows off Syfy’s desire for better effects and Thomas Jane’s passion for terrible hats. There seems to be an abundance of ground to cover and Syfy is not known for handling that well. The series is definitely the most ambitious in recent memory and possibly ever, but that doesn’t mean it will work. The clip doesn’t offer much substance, the sound bites are nothing to get excited about, but there were quick glances of actors that showed promise. Jared Harris of Sherlock Holmes and Mad Men fame giving a passionate speech before a tussle, Shohreh Aghdashloo and her hypnotizing voice making a plea for Earth, and Breaking Bad’s favorite hitman, Jonathan Banks, with the most memorable quote, “We make it all this way, so far out into the darkness… Why couldn’t we have brought more light?”

The show is based off of series of science fiction novels by Daniel Abraham and Ty Franck about a mystery taking place in space. Jane will play detective Josephus Miller who is on a mission to find a missing young woman. Strait will play Jim Holden, a captain of a freighter who becomes involved in the case. The pair will unravel history and expose a massive conspiracy in the universe.

The first season will consist of ten hour-long episodes and will premiere  sometime in 2015. The series is being adapted by Mark Fergus and Hawk Ostby, known for Children of Men and Iron Man. The pilot will be directed by Terry McDonough who has directed episodes of television’s Breaking Bad and the BBC’s Doctor Who docudrama, An Adventure in Space and Time. Will you be tuning in?

If you enjoyed Carly’s expansion, you can find the rest of her work right HERE on Sci-Fi Bloggers. You can also follow her on Twitter @MrsCarlyRodgers.