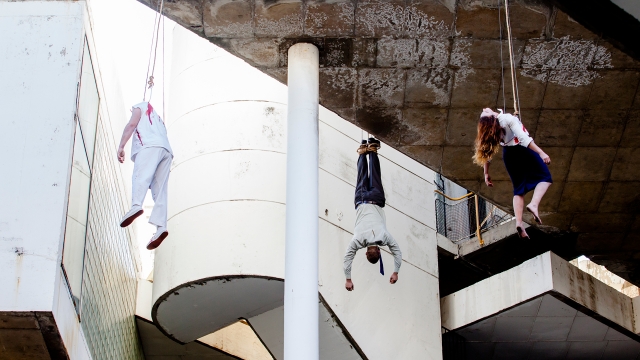 Part of the reason why I’m so geeked up for this episode is because of the blood. Yes, I am that person. I have an appreciation for gore, and it was everywhere, all over the place from beginning to end, and I couldn’t have been more happy.

Plus, Malex was gushing out at the seams! Michael and Alex have been trying to perfect Alex’s eviction powers (well, more like Alex is trying to do that and Mike is giving in like the closet lug he is). Mike flies around catching eight balls so that Alex can sing his new hit single, “Sanctify This Vessel”, and hopefully evict them from their human bodies. No such luck after Clementine. This means lots of secret conversations and long, strenuous hours spent with Michael. Alex even threw a proverb right back at him (I almost sobbed).

Anyway, it’s clear that Alex is trying to make this new superpower of his into something. At least if he can use evictions to save human lives, then Clem’s seemingly meaningless death and Claire’s anger would count  for something. The point is, our Chosen One is in a funk, and maybe that’s why he fell on top of someone (?). Men. 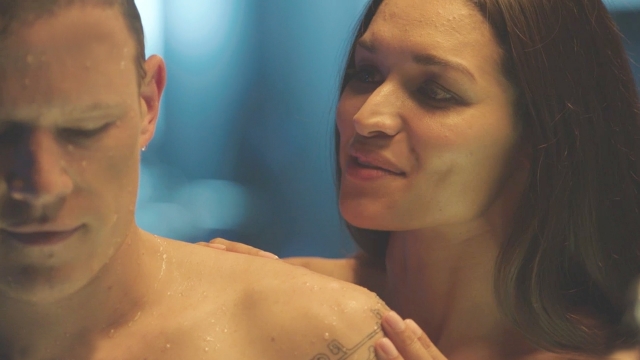 After a shower (the casual nakedness is still new to me) with Nomes (who I strongly considered not giving a name in this article and just calling her “Girl Corp” or “Random Chick,” but I strained to hear this girl’s…name, then I even googled, so here. That’s her), I almost feel kind of bad for her. She seems kind of desperate for Alex’s affection. I mean, you know and I know that the guy wants Claire. Girl, get it to-ge-ther! Oh, and we saw Alex’s butt. I’m mentioning this for you. I could care less. If they had given us a choice, I would’ve preferred Michael’s, but I guess he had his hands full with other things.

Señor Gabriel basically spent the episode stirring the pot. He possessed the body of a higher angel, Louis, in Vega and caused a heap of trouble, painting the town red with doubt. At first, I thought the guy was trying to gain some recruits, sway some opinions, but no. Gabe has no use for the pacifists or the indecisives. He kills three higher angels immediately and hangs them publicly to send a message. This opens up a can of problems for Mike, because now it’s out that there were angels living within Vega’s walls. 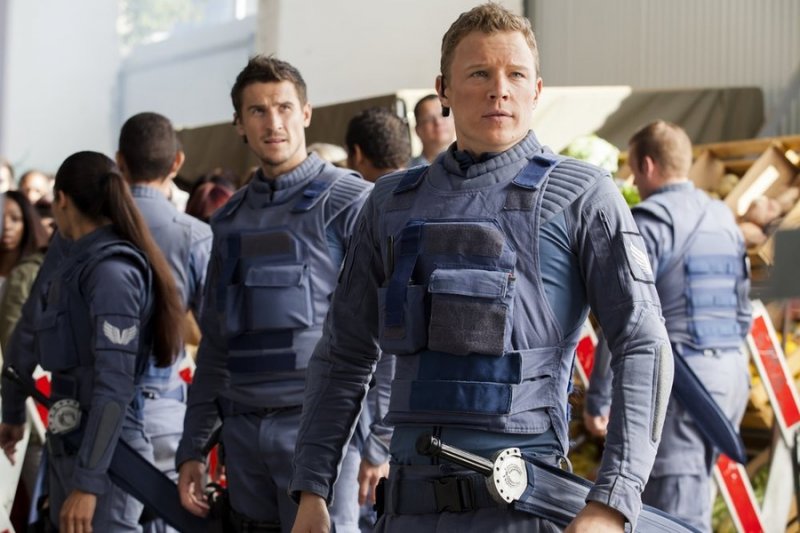 Could you believe his first suspect was Alex? Come on, Mike. As if Alex is capable of doing something like that.

People (like my lovely Ethan) seem to think that dead angels, no matter their stance on the war, are a good thing. The huge rift between angels and humans is beginning to widen and people are becoming suspicious of Michael’s true allegiance.

If Michael wanted to karate chop every last citizen of Vega in the face and flay them Ramsay style (I’d explain what that means for those of you who don’t understand, but I can only spoil so many shows at a time), he could have done it a looooooooooong time ago, but he didn’t. They should just say thank you and not make eye contact.

Becca was the one who discovered the angels’ bodies as she jogged (outrunning several guys from the Angel Corps, I might add. This is why every person in the Corps needs to take remedial angel butt-kicking classes and be forced underground to train with an abusive drill sergeant in a hardcore boot camp for several weeks, possibly the rest of their lives). 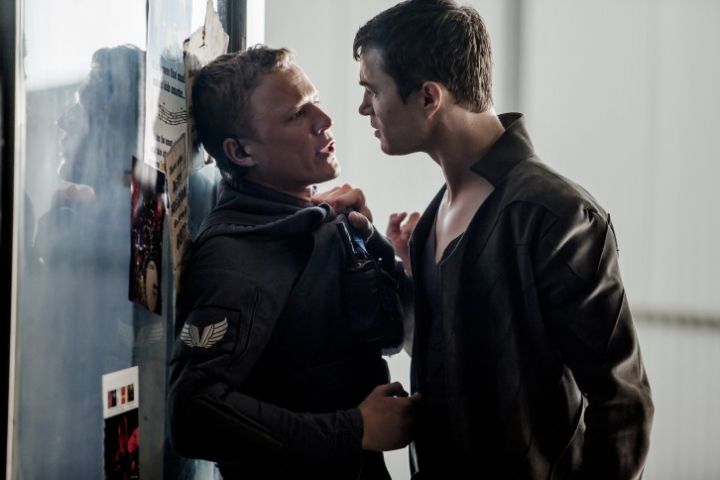 When Becca confronts Michael about essentially lying to her, they have an argument. Well, a Michael-Becca argument. No passionate yelling or throwing glass, but sharp, curt words and eyes that say too much. It’s literally like watching them make tiny cuts on each other, but Becca will ride or die for Michael. When Riesen asks if Michael knows, she lies to cover for him, but Becca can’t lie. Her eyes are just too big. The same thing happened a few eps ago with David.

Anyway, I wish killing those highers was the only thing Gabe did, but you know he has a flare for the dramatics. It wasn’t even the worst part. The worst is when he manages to plant doubt in Alex. Throughout the episode, there are flashbacks of Michael in Babylon, 1900 B.C. You know the flood? Noah, arc, cleanse the Earth, all of that jazz? Yeah. So, that was Michael, actually. He was swooping around distributing a genocide (God’s orders). It’s funny how he and Gabe reversed positions.

Gabriel (as Louis) tells Alex of Michael’s less than favorable past, and it bring him to the first message he read from the tattoos: Beware of those close to you (I think it’ll be Claire; I’ll bet you $5).

While Michael is away talking to Uriel, Alex gets tricked into meeting Gabriel (still Louis) in Michael’s room. More mind games. Except he invites someone else to the party— Nomes (or Noma). Dun dun duuuuun! 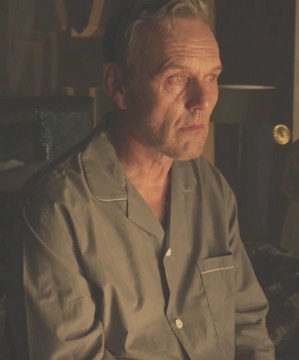 Turns out, she was an angel the whole time. I did not see that one coming, at all. I mean, the whole Clem/Claire’s mom thing was a shocker, but I kind of figured it out before I saw it. This one came as a full-blown surprise. Maybe it’s because Nomes seems too desperate to be an angel? I should really stop calling this girl desperate. My mouth was gaping. I guess now she’s going to get more lines, huh?

When Michael returns, Alex performs his song, “Sanctify This Vessel”, for the archangels and forces Gabe out of Louis’ body.

Gabe returns a little out of it but, surprisingly, Uriel is there. Even in the flashbacks, she was between the two boys during a fight. However, she doesn’t seem neutral these days. She was in on it with Gabe. She told Mike that Gabe forcibly took the family ledger from her, but the truth looks like she gave him the names. I thought Uriel was playing both sides, but so far she’s only been playing Michael. I bet Mike already know though.

In the House of Whele, David is exemplifying Medicaid, a wheelchair, and prune juice. He looks like a hot mess. Willie is practically keeping David a prisoner, using his damaged body and weakness as an advantage. However, David is a tough cookie. He almost gets away. A guard tricks David into thinking he’ll help him leave, but he actually brings him to his own lion’s den.

William goes into a speech about how David is the ouroboros (which I know of because Hemlock Grove—watch that immediately if you have not). He says that David’s greed is consuming him like a vicious cycle, and the only way to put an end to it is to take out the problem. Who knew David Whele’s problem was David Whele? He’s got three choices for the gun with the single bullet that delusional, crazy cult leader Willie graciously left for him: kill William, kill the lion, or kill himself. David chooses to kill the lion and save his life.

The shrunken, traumatized man at the end of the episode suits one of those “Feed the Children” commercials better than one of the main antagonists of the show. I wonder why William didn’t simply kill David. 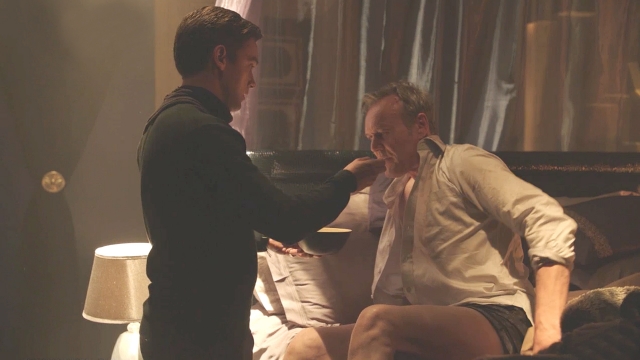 Anyway, Claire wants to push the wedding up to knock Riesen out of office quickly. Every higher angel (except Nomes) is dead because they tried to escape Vega and were shot down. I guess there goes the reinforcements for when the real war with Gabriel starts up again.

The season finale is next Thursday. Yes, you read correctly. Season Finale. WTF? Only eight episodes? I have no idea how they are going to wrap up this season, but from the promo trailer, it looks really good. I hope this show gets renewed! We still haven’t met Evelyn (and at this rate, I doubt we will).

Donkey of the Week: Alex Lannon

Now, it’s been no secret that I kind of think Alex is just, hm, what’s the word? A twat. But that doesn’t mean that he’s an idio—well. Michael believes in him, and I believe in Michael, so…we’ll see. But yeah, there were so many moments this episode when I was screaming at him through the TV. I literally wanted to jump in there and choke him. Gabe was being Captain Obviously-Your-Enemy, and Alex was completely missing every sign, like dude! Did you not just see this man lock the door? Even dummies in horror movies know that when someone locks the door on you, you’re about to get a machete to the face. I just need our Savior to use his noggin. This goes back to what Mike said last ep. Alex gets caught up in his emotions, and that nice, semi-wrinkled brain of his slides right out of his head.

“Neutrality is a myth propagated by those of thin conviction and even weaker constitution.”