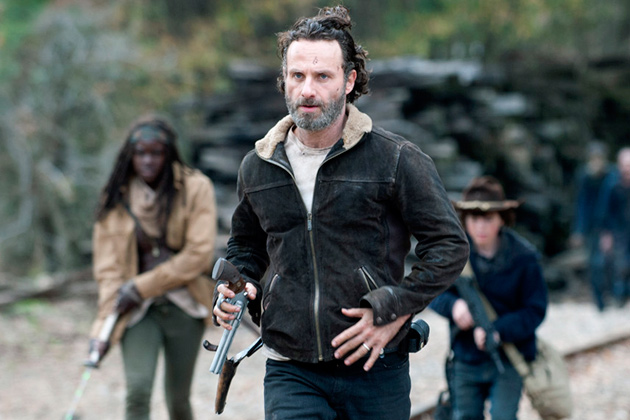 The following piece was written by Sara Villarreal and sent in to us for consideration. Here at Sci-Fi Bloggers, we like showcasing a variety of different opinions. Normally they are those of our intelligent team of contributors, which continues to grow, even to this day. However, there are times when we are sent something written by a fan of the site, or someone simply interested in sharing their ideas, that we are compelled to share. And so, we give you yet another Sunday Surprise!

What distinguishes The Walking Dead from the average zombie-apocalyptic horror show is its continuous re-evaluation of humanity through the walkers, or the reanimated dead, and the living. The writers themselves seem to be hinting at the fact that these walkers are somehow still human, and that the living are not less monstrous than them, but perhaps more so. The people in this show have adapted survival skills and mentalities that cause them to behave animalistically. They do everything they can to protect and preserve themselves and the people they love. However, these people will not turn into complete monsters as long as they have others to bring them back to their humanity.

This idea of monstrosity in humanity comes to a crux in two major episodes leading up to the end of season four. The first is “The Grove”. In this episode, we follow Tyreese, Carol, Mika, Lizzie and Judith on the train tracks that lead to Terminus, a self-proclaimed haven for survivors. As they rest on the side of the tracks, Carol and Mika scope out the area while Tyreese rests with Lizzie and Judith on the tracks. A walker comes out of the brush toward them and becomes stuck near the railing. Lizzie begs Tyreese not to kill it saying, “Sometimes we have to kill them, sometimes we don’t.” Lizzie has always advocated for the walkers, feeding them mice at the prison and giving them names like pets.

In the meantime, Carol and Mika come across a house in the middle of a pecan grove. Once Tyreese and Carol check for walkers and Mika kills one of them, Lizzie goes into a fit of anxiety. Mika tells her to look at the flowers so that she can calm down. They later settle into the house and find it to be a warm and safe place. The next day, Carol looks out the window to see Lizzie happily playing tag with a walker in the yard. She rushes out and kills the walker. Lizzie screams at Carol saying the walker was her friend and wouldn’t hurt her.

The next day, Carol and Tyreese go out hunting. The anticipation of Carol telling Tyreese the truth of how she killed Karen and David builds, but Carol cannot bring herself to do it. They come back to the house to find Lizzie kneeling over Mika, her hands covered in blood a knife lying next to her. Carol and Tyreese look on in horror as Lizzie explains that Mika will come back because she didn’t stab the brain and that she was going to do the same to Judith. As Carol and Tyreese move closer, Lizzie swings her gun up at them. Carol talks her down and says she believes her. Tyreese ushers Lizzie and Judith away. Carol, sobbing, takes a knife and stabs Mika in her brain to prevent reanimation.

That night, Tyreese and Carol discuss what they should do. Tyreese suggest that he take Judith and that Carol take Lizzie to look after her. Carol disagrees saying Judith needs both of them to survive. Carol believes Lizzie is too dangerous to be around other people and Tyreese reluctantly agrees. The next day, Carol takes Lizzie out for a walk. Lizzie becomes upset thinking that Carol is angry for pointing a gun at her. She still doesn’t realize the gravity of what she’s done. Carol says to look at the flowers, remembering that it calms her. Carol shoots Lizzie, Tyreese watching quietly from the porch. They bury the girls.

Later that night, as they are sitting at a dining room table, Carol passes Tyreese her gun saying she was the one who killed Karen and David to help prevent the disease from spreading in the prison. She repeats multiple times, “Do what you’ve gotta do.”  Terror, then anger consumes Tyresse before he says with absolution, “I forgive you, but I’ll never forget. And neither will you.” He goes on to say that this act that she committed and the guilt that she feels has become a part of her, just as the grief has become a part of him. They are both able to come back to their humanity through the understanding that they each have the potential to do monstrous things. What Tyreese saw is that Carol is living with it, feeling just as much pain as he does.

In the season four finale, “A”, we also see what monstrous things people can do and still come back from through the help of those around them. Rick, Michonne, and Carl are taken by surprise by a rough group of men Daryl accidentally joined up with a few episodes back. These men tracked Rick in order to obtain a sense of revenge for Rick strangling one of their own. Rick and Michonne are both held at gunpoint and Carl is held in a chokehold by a foul and slimy individual. Daryl, who had hoped to slip away from these men, realizes who they have captured and comes forward, asking them to take him instead. Daryl calls them “good people” and the captors perceive this to be a lie and begin beating him. The leader, Joe, tells Rick, they’ll have their way with the woman, then the boy, then kill him.

Rick sees Carl struggling against the man holding him and something in him snaps. He swings his head back as the gun next to his head goes off. He becomes disoriented and his captor laughs at him. Rick finally stands, rushes up and bites through the man’s throat. Everyone is stunned still. Michonne is the first to react, grabbing her captor’s gun and shooting him with it. Blood seeping into his beard, Rick takes a knife to Carl’s would be rapist and continuously stabs him with it. Michonne holds Carl close, covering his ears. He watches every moment of it.

As a new day comes, Daryl tells Rick, “Last night, that wasn’t you.” Rick lets him know that it was and that’s why he and Carl are still alive. He is able to accept his darkness, his survival-ready, animalism. He also acknowledges that the only reason it’s worth being that way is because of the people he loves. In that moment, he calls Daryl his brother, and Daryl accepts him and respects him, despite what he’s done.

It is evident in the scenes that follow that Carl is not as resolved about the situation, and may even fear his own father. When Michonne confronts him about this, he doesn’t give much of a response. She goes on to tell him that when Andre, her son, died, her boyfriend and his friend Terry were high. When the walkers came into the refugee camp, they couldn’t help him, and got bit. She then goes on to explain that these were her first companion walkers, and that though she knows that it was horrific, it seemed like what she deserved.

She tells Carl that she was gone a long time before Rick, Andrea and Carl brought her back. She also tells him not to be afraid of Rick. Carl then comes to the realization that the pride and respect that his father feels for him is unwarranted. He confesses to having violent impulses ever since he killed a kid in cold blood. He feels that he has done evil too. Michonne hugs him, expressing understanding and forgiveness.

In the end, Michonne, Carl, Rick and Carol come to the realization that everyone has a breaking point. What you do after that is what matters. The question is not so much “Who are we?” or “What have we done?” as “Who are we going to become?” The only way these people will ever become whole again is if they stand by each other, regardless of their monstrous pasts.