NOTE: This is a summary of much of the graphic novel in question. It is full of spoilers.

The Death Star. A space station the size of a moon. It took twenty years to make. Untold millions of slaves died in the making of it. Billions of credits poured into it. A weapon capable of reducing planets to ash. Until some wet-eared farmboy from Tatooine made a million-to-one shot and blew the whole thing up. So the question is this: who’s going to be held accountable? You guessed it: everyone’s favorite armored Sith Lord, Darth Vader himself. 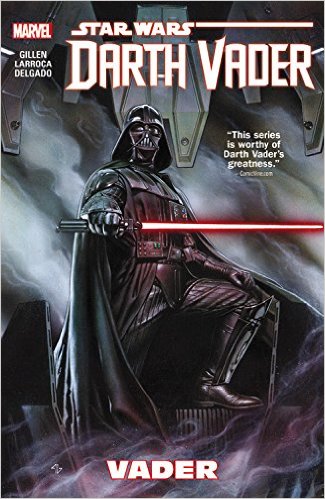 As the Emperor’s right-hand man, Vader had all the resources and authority to back his questionable actions. But now, being the scapegoat for losing the Empire’s prized weapon, Vader finds himself demoted to the underling of Tagge (the Imperial officer he originally Force Choked in Episode IV), left to fend for himself.

So Vader decides to prepare his own resources to tide him over until he regains the Emperor’s favor. He approaches Aphra, a high-end droid specialist, to construct a droid army loyal only to him. Unfortunately, the only droids available are the outdated battle droids used in the Clone Wars. However, beggars can’t be choosers, and so Vader continues on.

With his new entourage beside him, Vader hunts down a man named Cylo IV (who has had many private meetings with the Emperor). Jealous, Vader kills Cylo, then hacks his database and follows the trail to a secret facility. Vader doesn’t know what the man is up to, only that every scrap of Cylo’s existence needs to be destroyed if the Emperor’s favor could return to him.

But what Vader finds in that facility is far more than he bargained for.

Five deadly assassins wait for Vader, each one augmented by cybernetics. And then suddenly the Emperor is there, having a front row seat to what amounts to be a gladiatorial sales meeting/demonstration. Each assassin, Cylo V (Cylo IV in a new body) explains, was altered to outshine Vader. Vader now fends off each one not just for his life, but for his usefulness to the Emperor.

In true Chosen One fashion, Vader destroys all the assassins, but is left humiliated by the knowledge that the Emperor set this plan in motion twenty years hence. And to cap everything off, Vader discovers the pilot that inadvertently stripped him of the Emperor’s favor is his own son: something else the Emperor kept from him.

The graphic novel is all about Vader’s relationships, particularly with his Master. The Sith do not possess a jolly kinship. They thrive on betrayal, suspicion, and assassination. But in the novel, Cylo’s “audition” makes it clear that Palpatine is addicted to the power that wielding the Chosen One gives him. And if a better weapon comes along, Palpatine will not hesitate to circumvent Vader to get it. Combine that with the fact that Palpatine kept Luke Skywalker’s existence a secret, and you have the perfect example of the aggressive animosity that is the Sith relationship.

Darth Vader isn’t known for his failures. But when he does fail, the Emperor is completely comfortable with humiliating the “Chosen One.” Not only that, but the Emperor doesn’t see Vader as a person, just as a weapon. The long-time friend routine Palpatine used to seduce Anakin from the Jedi was just that, a routine. Against all logic, Vader stood by Palpatine’s side, mainly because the Emperor was all Vader had left. But this…this changes everything. And not for the better. Have fun reading.

If you enjoyed Michael’s legend, you can find the rest of his work right HERE on Sci-Fi Bloggers. You may also check out his personal blog over HERE.