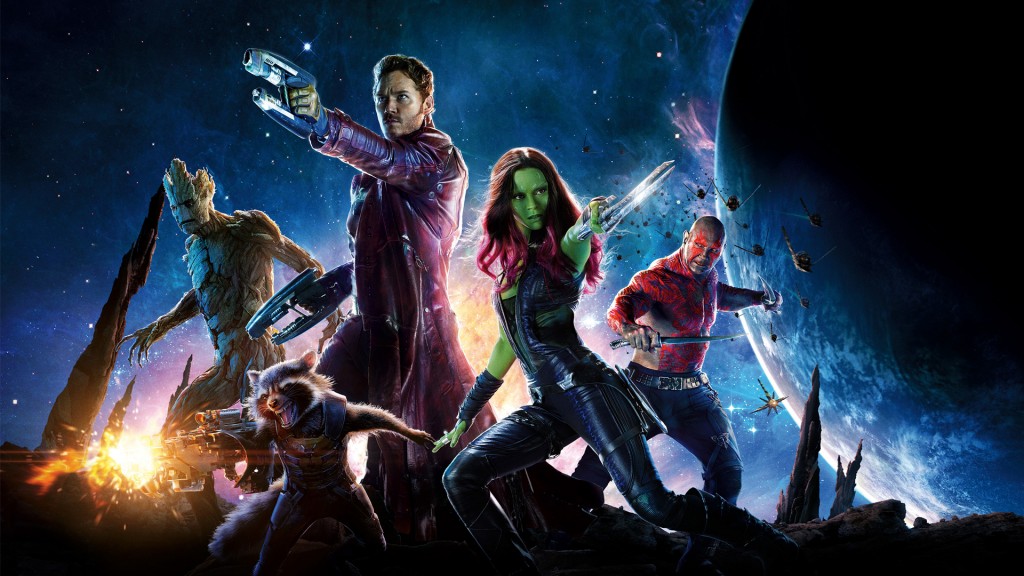 Guardians of the Galaxy, the tenth feature-film in the ongoing Marvel Studios’ Cinematic Unvierse, begins in a surprising fashion. A boy waits in a hospital for his mother to die. This affecting scene ends with our young main character unable to accept the reality of the situation as he runs outside and is subsequently abducted by aliens.

Then, the most important thing in the entire film happens. After roughly four minutes of screen time, the Marvel Studios logo takes shape. The sound of fluttering pages and triumphant fanfare immediately takes precedence over everything we’ve just witnessed. I’m not entirely sure if this is their new logo or not, but it’s the first time I’ve really noticed its effect. The producer is more important than the product itself.

This isn’t to say that this particular product doesn’t carry its own weight in terms of adventure, excitement and peril, but, at the end of the day, this is just another exercise in keeping the brand awareness alive for a couple more months until the next one. Because of this, it’s enjoyable nature and endearing characters make Guardians all the more infuriating. Especially considering how Marvel Studios cleverly avoided the same issue earlier this year with Captain America: The Winter Soldier, an installment that feels downright necessary in comparison to the place-holding going on here.

Chris Pratt stars as Peter Quill, a.k.a. Star Lord, a roguish punk with a heart of gold who begins the film proper—after the ostentatious logo display—uncovering an easy-to-find, all-powerful orb while dancing to “Come and Get Your Love”.

This sequence sets the tone for what’s to follow so perfectly that one wishes the aforementioned opening scene were scrapped entirely. That prologue does become important to the rest of the film, but not enough to the point that we had to start the whole thing off with it. As is, it only serves to highlight a tonal awkwardness that becomes more apparent later on.

The plot unfolds as Star Lord is embroiled in a blue-skinned alien’s scheme to use said orb to destroy an entire planet. From this perfunctory plot comes the formation of the titular Guardians, a team based at first on conflict, then convenience, and finally commitment to each other.

The team is made up as follows. Zoe Saldana is Gamora, a green-skinned alien who begins as a henchwoman to our antagonist but quickly shows to have her own scheme in place. Dave Bautista is Drax, a delightfully serious-minded alien who continually misunderstands common figures of speech. Bradley Cooper does a surprisingly good job making his voice disappear as the talking Raccoon, a bizarre result of genetic splicing with a chip on his shoulder as a result. Vin Diesel is a walking tree that basically plays the role of a Chewbacca-type. He’s a mascot who everybody but the audience seems to understand coherently.

With the leads out of the way, another standout character comes in the form of Michael Rooker as the bizarre father figure/bounty hunter Yondu, the only blue-skinned alien whose name I bothered to remember. He has a killer weapon that’s teased cleverly before unleashed, and he has an excellent rapport with the main character.

Overall, the film plays to its strengths when it focuses on the formation of this sordid lot and how they interact with each other. It suffers dramatically when it tries to fit itself into the greater universe set up by the other Marvel films. Joshn Brolin as Thanos doesn’t do much for the movie beyond set up a character everyone talks about yet doesn’t actually do anything if only for the virtue of setting him up as an Avengers-sized antagonist. The whole plot concerning the orb reeks of a very similar route taken in the story for Thor: The Dark World, and ultimately sets up the exact same thing that movie did.

Speaking of Thor: The Dark World, this film plays like a perfect foil to it. While the God of Thunder’s sequel was a potentially solid fantasy-adventure saddled with horrific comic relief and a weak villain, Guardians of the Galaxy plays as a strong space comedy encumbered with awkward diversions into dramatic territory, also featuring a weak villain.

Thusly, the reason I haven’t referred to the villain (played by Lee Pace) as nothing other than that blue-skinned alien is because he barely registers beyond a serious voice. With little screen presence or any kind of menace to him that stays with you, he’s just another thinly-written antagonist in a long line of them in these Marvel films, going back as far as Jeff Bridges in Iron Man with only Tom Hiddleston’s turn as Loki being an exception (who feels shoe-horned into the plot solely for the third act finale and never as a natural extension of the story).

Part of me wishes there were no all-powerful orbs or superfluous blue-skinned alien menaces or a planet in need of saving at all in this film. Why can’t we have a morally ambiguous movie to match its morally ambiguous main characters? With the characters fleshed out so well among the essentially noise-inducing mayhem wrought by the film’s actual “plot,” something to match shouldn’t have been outside the realm of possibility.

Guardians of the Galaxy is a decent, if not exceptional, capper to a summer of surprisingly strong franchise fare. It introduces us to characters worth following through more adventures, but doesn’t go all the way with its potential and settles on something a little more generic in the process. It’s good fun, but that’s about it.

This piece marks the return of Sci-Fi Bloggers veteran, N. Demmy! If you’d like to see his earlier work on the site, CLICK HERE. Welcome back, Demmy! Can’t wait to see what else you’ll dish out!