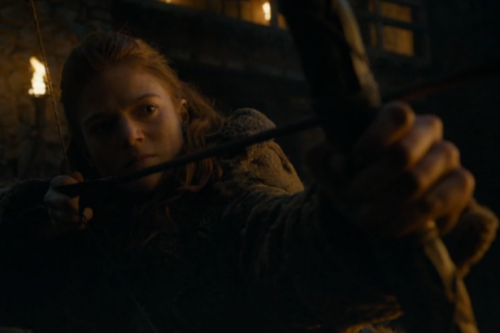 We are getting closer to the end of this exciting fourth season. The Iron Throne is about to be attacked form all sides. In the last episode, we left our heroes in a terrible situation with a death sentence pending on Tyrion’s head. And guess what? We found ourselves watching Gossip Girl on the Wall. Poor Sam is still mourning the supposed death of Gilly. He ends up asking his quasi-mentor, Jon Snow, what being with a woman is like. Jon compares it to composing a meat wrap (no wonder Ygritte’s after him).

After this brief—yet still somehow too long—romantic introduction, concluded with the unexpected return of Gilly and an even more unexpected first kiss from the fattest crow on the Wall, the real action finally begins. The Wildling army approaches, determined to take Castle Black and conquer the Wall by, you guessed it, killing everyone in whatever cruel manner they can.

The battle starts and things are pretty much f**ked for our loyal protectors. They’re about as ready to face an army as Joffrey was ready for his own wedding. The most powerful weapons they have are barrels of boiling oil and their boring motto, which is honestly not that encouraging (no glory, no lands, no sex, no other outfit but that black dirty mantle, really?). 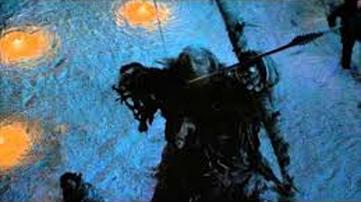 On the other hand, the Wildlings arrive heavily prepared. We can now plainly see that they have formed an army rivaling the Uruk-hai of Isengard, featuring giants riding mammoths. No, that is not a metaphor, they actually have humanoid giants that emit the classic “I’m a monster so I can’t talk” sound, while riding f**king mammoths. Now, I understand that Game of Thrones is known for being full of twists, but mammoths?! Mere rabbits were nowhere to be found in the land beyond the Wall, and now we’re finding out that the Wildlings may have mammoth farms? Seriously, where do they come from?!

Setting my unresolved question aside, the battle is mostly even: the Wildlings enter the castle, slaughtering people left and right, while the Watchers, under Snow’s command, defend their headquarters with bravery and honor (most of the time, anyway).

At last, however, we arrive at the moment we are all waiting for, the confrontation between the heartbroken (almost literally) Jon and the only woman he has ever loved, Ygritte. They face each other and our hearts stop. She glares at him, furious. He replies with his finest puppy dog smile, as if to say, “It’s okay if you tried to kill me, I still love you.” Love triumphs again, with Ygritte forgiving Jon, but things take a turn for the worst when a child mercilessly kills the Wildling with an arrow. Ygritte dies in her bastard’s arms after the typical moment in which two lovers offer each other a final goodbye. Jon Snow then reaffirm’s his terrible fate of always losing that which makes him happy. He really knows nothing, poor thing. 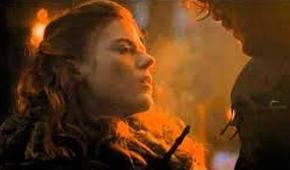 After this heartwrenching moment, the Watchers suddenly remember that they do have a huge weapon, a big iron pendulum that just sweeps away every enemy attempting to climb the Wall. The battle is over, for now, and the good ones prevail for once. The episode then closes with Jon embracing his new “Brave Hero” role, leaving to find and defeat Mance Rayder, leader of the Wildling army.

Okay, so although at the start of the episode I saw Jon’s sad face and thought, “Oh no, not here again,” this episode was, without a doubt, one of the best of the season. First of all, we finally started in one place and we remained there without jumping from one useless couple’s moment to the other, thus interrupting the flow of the story. Secondly, I have to say that Game of Thrones has proven once again to be an incredible show visually. The battle between the Watchers and the Wildlings has nothing to envy re all the battles we saw in epic films like The Lord of the Rings and The Hobbit. The special effects are breathtaking and the attention to detail makes us forget that we are watching something made for the little screen. 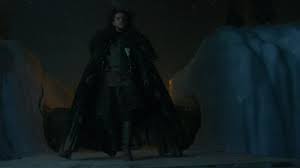 So, even if I’m not really a fan of this fourth season, it is fair to say that this show always gives me some good reasons to keep on watching it. And now there’s nothing left to do but wait for the final chapter. Tyrion’s trial is still unresolved (sort of) and a confusing mess is going on outside of King’s Landing. Will the season finale meet our expectations (or hell, at least mine)?