During the nineties, the crisis surrounding Earth’s ozone layer was at the forefront of media and environmentalist attention. Seminars, reports, school assemblies- all over what could be referred to as God’s own cancer providing form of Goatse. The amount of ozone was thinning, and we as a species were fucked. Then Y2K reared its ugly head and the dangers of a depleted ozone layer were pushed aside for the more general discussion about global warming and climate change- actors and actresses vouching for green technology and the people beginning to take Smart cars seriously. But the lack of media attention did not change the fact that the hole was still there, still dangerous, and in the year 2012 we are now beginning to see some of those repercussions.  In the form of aquatic skin cancer.

Researchers from the University of Newcastle and the Australian Institute for Marine Science had each been conducting their own studies in the Great Barrier Reef, one involving the prey for the shark species the other focusing on coral. Each of the teams noticed that coral trout, normally a bright orange color, seemed to be spotted with large dark patches and lesions on the fish. Some of these patches were small, barely something that would need to be taken note of. In other cases, these patches nearly covered all of the fish. 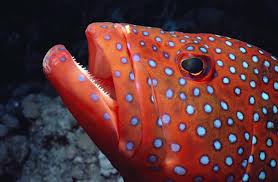 At first, each of the research teams figured there had been some type of infection- perhaps with a food source or in the breeding population. A type of bacteria or possibly just pollutants that had been dumped in the water. However, after testing samples of the skin Michael Sweet, a coral expert, determined that the cells in the damaged skin were identical to that of laboratory fish that had been given melanoma. These fish would become the first documented reports of skin cancer in a wild species in the world.

The researchers concede that more evidence would have to be gathered before any conclusive claims could be made, but after having found no bacterial or viral infections and no manmade pollutant causing the melanoma there is one likely culprit that they all agree on. The great big goatse in the sky; the depleted ozone layer.

The basic purpose of that layer of atmosphere is to essentially bounce back the harmful UV radiation that results in horrible sunburn and melanoma when you stubbornly refuse to put sun tan lotion on. It is there to keep all of us living things on earth still living. However, because of CFC’s and other greenhouse gasses being released into the atmosphere, which catalyze the destruction of ozone, it is being depleted. This allows more UV into the earth and cancer for everyone, everywhere. 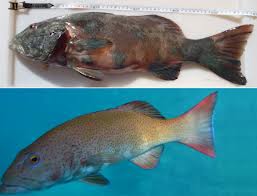 Doctors and scientist know that too much sun exposure results in melanoma and other cancers developing. Humans do not do well with excessive radiation, unless it came from a spider bite. However what makes the fact that wild fish populations have now contracted melanoma important is because they are fish. Fish that live under the water’s surface. Their exposure to powerful UV rays would not necessarily be as great, as say, Snookie.  And they are still contracting melanoma.

What does this tell us? Really, it is too early to exactly say what this poses for the rest of the globe or for humans.  The largest hole is over Antarctica, just a hop, skip, and jump away from Australia and the Great Barrier Reef.  The exposure to radiation is already much greater than the average organism on earth, and fish scales are not exactly as protective as a nice layer of fur or down. As well the overall stressful environment the coral trout live in makes them slightly more susceptible to disease and health issues.

The good news is the fact that the melanoma is only surface, meaning it has not traveled deeper into the fish or caused any particular harm. However, scientist do note that may just because the ones already significantly affected by the melanoma may have been too ill to actually have been caught and due to sickness are much more easily picked off by predators and so not part of their research catch. 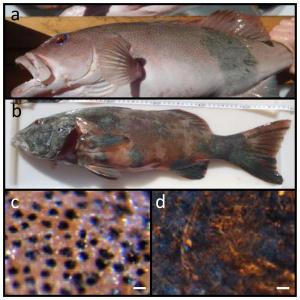 The bad news: there is still an ozone problem, and the fact that we are now beginning to notice cancer growth in wild fish populations is not making for a promising future. So, what can we do with this?

Go green and take the bike to the corner store. Or walk.  Otherwise Earth’s goatse will get you. And your pet fish.